Winnie Lightner: Tomboy of the Talkies 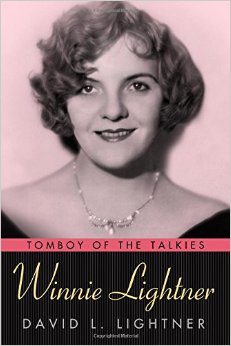 Three cheers for Winnie Lightner: Tomboy of the Talkies, historian David Lightner’s new book about the stage and screen star who bears his name (if not his genes). As David put us right a few years back (see comments section in our original Winnie Lightner post) Winnie ‘s real last name was Reeves; like many vaudeville and circus folk she took on the name of a more senior partner in the act she joined, in this case singer Theo Lightner, whose sister she was thereafter claimed to be.

Since writing my original post I’ve since had the pleasure of seeing a few of the films Winnie made during her brief career. The subtitle of David’s book explains the brevity of her movie stardom. Despite her copious charisma and obvious talent, she was strictly a pre-code creature, a figure of the Jazz Age. She was sassy, irreverent, naughty and (though manifestly straight) a bit gender ambiguous. Add to this a tendency to plumpness, and the fact that Hollywood turned away from musicals for a time, and we have our case for why such a talented and popular star was not retained by the studios after 1934.  Mae West was to suffer a similar fate just a few years later for a different, though related, set of reasons.

David also gives us a sense of her personality, which helps clear up the question of why she disappeared. Show business to her seems to have been kind of a lark. Unlike so many performers we’ve written about, she was not “driven”; it didn’t matter so much to her. Few were ever so lucky as she. She joined the act of Theo Lightner and Newton Alexander at age 15; three months later she played the Palace. She became the hit of the act. When they made it to Broadway in George White’s Scandals, she became an audience favorite; and her partners dropped into obscurity. Then came talkies, and she was the break-out star of such early musicals as Gold Diggers of Broadway and Show of Shows. (Her hit song from the latter movie is “Singin’ in the Bathtub”, which is a perfect illustration of her personality). When her contract was not renewed by Warner Brothers, and when MGM also failed to sign her, rather than try to find work as a supporting player (as almost anyone else would have done) or pursue a career on stage or in night clubs, she simply retired at age 35. She didn’t have to do anything, and apparently didn’t want to. She was the paramour of director Roy Del Ruth, whom she later married. She apparently had enough dough to live on. So she just lived. How her Hollywood colleagues must have scratched their heads. Almost no one is like that.

David Lightner is a genuine historian and professor of history (University of Alberta), with previous books on the Civil War and reformer Dorothea Dix. The book is full of first rate research from primary sources. You can just tell that he pored through all the relevant periodicals to get every bit of available dope on Lightner, so you get a real sense of where she was, when, and a real sense of detail of her time in vaudeville, Broadway and Hollywood. Her early life though is more mysterious and probably beyond the ability of any historian to discover. The most vexing is the question of the circumstances of how she came to join Lightner and Alexander, and what sort of performing she had done prior to that. All there is in the record is hearsay, and accounts conflict. Times like this when you wish you could animate the dead and grill them to get to the truth! The fact is, David Lightner has done the best job that can be done in this case. Criswell Predicts that this is the best book there will ever be on Winnie Lightner, and a welcome addition to any performing arts library, equally valuable to scholars and show biz buffs.