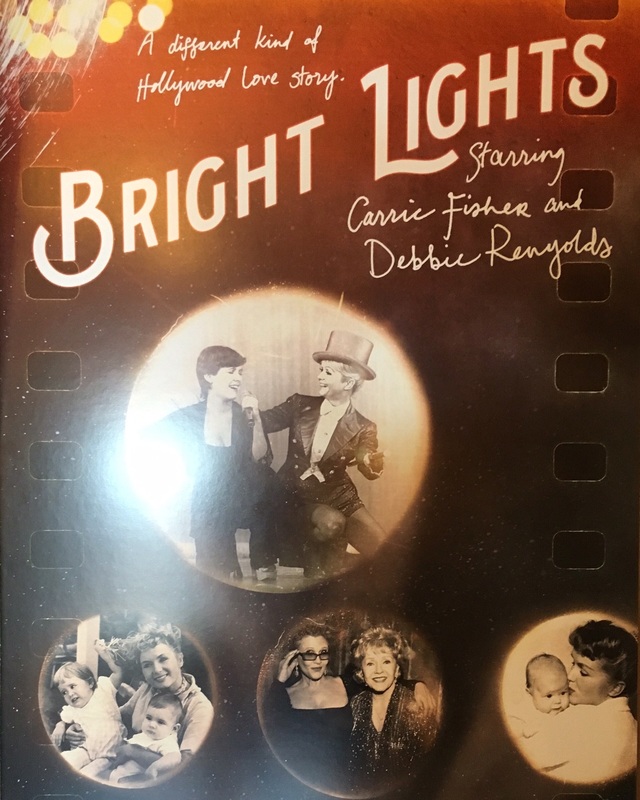 For obvious reasons, we have been catching up with our Carrie Fisher–watching more expeditiously than we might otherwise have done. Over the past several days we looked at Postcards from the Edge (which I’d never seen), The Force Awakens, Wishful Drinking, and then last night the wonderful HBO documentary Bright Lights, just released.

The timing of the film is jaw-dropping; essentially it captures the final days of three of its principal subjects, Fisher and both her parents. Her father, singer Eddie Fisher occupies the fringes of the film as he occupied the fringes of the lives of his children. He comes across as a morally bankrupt character. That’s no surprise. What is a surprise is the deep, palpable love between Carrie Fisher and her mother Debbie Reynolds. The public knew of competition and frisson and parrying, and of course that is part of it, but I think what we didn’t realize is that we were merely seeing and hearing a public version of something quite similar to most mother-daughter relationships, at least in my experience. Aren’t most of them to some degree contentious, mixed with a great deal of affection and camaraderie? You squabble while you stuff the turkey, and then you hug each other. I related to their relationship a lot; my aunt used to live across the street from my grandmother. They were essentially best friends. One would pop over to see the other one every day. And this is how it was with Fisher and Reynolds, who lived next door to each other. It’s like living together, but with just enough distance to go home at the end of the day.

The film is incredibly intimate and revealing, adding to the power of its timing. Both women are former beauties dealing with aging in different ways. Reynolds was failing. I had the mistaken impression watching it that she was a good ten years older than her 84 years. In the opening scenes I thought she was amazingly together for a woman of her age: charming, witty, etc. (and she was).But then we see her fail: she falls and bruises her face. We see her sundowning at crucial moments. On the other hand, Fisher at 60 seemed to be embracing the role of “old woman” with full vigor. Besides the occasional news quote, I hadn’t really looked in on her in a couple of decades and was astounded at the transformation. In her youth, she was unbelievably gorgeous. Those EYES, both large and and intense, giving her the contradictory qualities of neotenous hotness and flashing anger. What a perfect stroke to cast her as a princess; she was regal in just that way. If she had chosen to, in the glamour-puss tradition of her mother, I have no doubt she’d “clean up” impressively like a grand dame, even at 60. But she seemed to prefer being the author and wit to being the actress. She literally enjoyed taking her shoes off, not coloring her hair, and walking around with a small dog under her arm. In her younger days, fresh from acting schools in London, she had a bit of mid-Atlantic affectation like the stars of the Hollywood studio era. In recent years, her voice went a register lower, and she reverted somehow to a new comic persona not unlike Albert Brooks. It was as though she were channeling her own grandparents.

Not that she still didn’t love show business as much as her mother. At one point, she does a fairly killer Streisand impression, revealing not just an inherited talent, but the fact that she had worn out the grooves on the LP. The poster art (above) and the title of the film do a wonderful job of conveying the romance these two women have with show business.  It is INFECTIOUS. If you are a show biz buff, you will walk away from this film with your ardor redoubled. Debbie Reynolds owned Dorothy’s ruby slippers from The Wizard of Oz! (At one point, Reynolds accidentally drops them on the floor, and I shouted, “That’s like dropping pieces of the True Cross!”)

Another insight I had was….sure, Fisher did drugs a couple of decades ago, and was a heavy smoker, but, wow, she sure has been busy these past few months. That really seems obvious. Doing these new Star War movies (for which she was expected to exercise and lose weight), a new book, a new book tour, a new solo show, caring for her mother, and in the midst of it all THIS DOCUMENTARY. That’s a lot. It’s enough, well, to give you a heart attack. But the fact that it’s logical doesn’t make it hurt any less. Her early movies were an important part of my youth; her oft-quoted wit in the years since have been an inspiration. We could have done with another two, three decades of her mordant, larger-than-life presence.