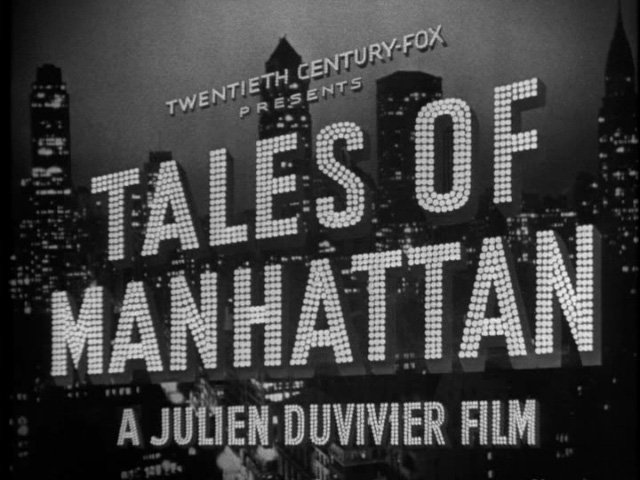 The tale of Tales of Manhattan (1942) is one that was sad for W.C. Fields in his own day, but one that had a happy ending for his fans. An anthology film not unlike If I Had a Million, the segment in which Fields appeared was cut from the film in its original release. But the missing footage was rediscovered in the 1990s and has gotten its “day in court” since then, appearing as an extra on the DVD release of the film, and receiving occasional theatrical and tv screenings, and even showings at museums.

This addition to the canon is more than welcome; It is necessary. It is as strong as anything else in Fields’ body of work, stretching the comedian’s glory days just a little bit further. Some have postulated that his segment was too good, which may have been the true motivation behind the section’s excision. The official line was that it was cut to shorten the movie, and it was the easiest segment to snip out, the others being more entwined with adjoining portions. The irony of course is this: the rest of the movie is a bore. In the long run, it would have attracted much more interest over the decades with the Fields section left intact.  I would imagine very few people seek out Tales of Manhattan, compared with the numbers who buy and rent movies with Fields in them (e.g. the aforementioned If I Had a Million).

No one ever seems to mention this, but the title of the film is pun, because the film is all about a pair of tails, i.e. a tuxedo. (It’s based on the novel Story of a Tailcoat by Francisco Rojas Gonzalez). Much like the rifle in Winchester .73, the suit passes from person to person,and each wearer is the subject of his own interesting story. Most of the stories are dramatic, even sudsy, although the all-star cast is a saving grace: Charles Boyer, Thomas Mitchell, Rita Hayworth, Ginger Rogers, Henry Fonda, Cesar Romero, Charles Laughton, Edward G. Robinson, George Sanders, J. Carrol Naish, Paul Robeson, Ethel Waters and Eddie “Rochester” Anderson.

The Fields section is priceless. He plays a con man called upon to give a temperance lecture at the home of wealthy dowager Margaret Dumont, an event where the punch bowl has been spiked and everyone proceeds to get roaring drunk. One of the joys is the spectacle of watching Fields interact for the second time with Dumont (the first was Never Give a Sucker an Even Break). And my greatest delight about the turn is that Fields has a scene with the very young Phil Silvers, who plays the salesman who sells him the tuxedo. A true passing of the comedy torch if ever there was one.