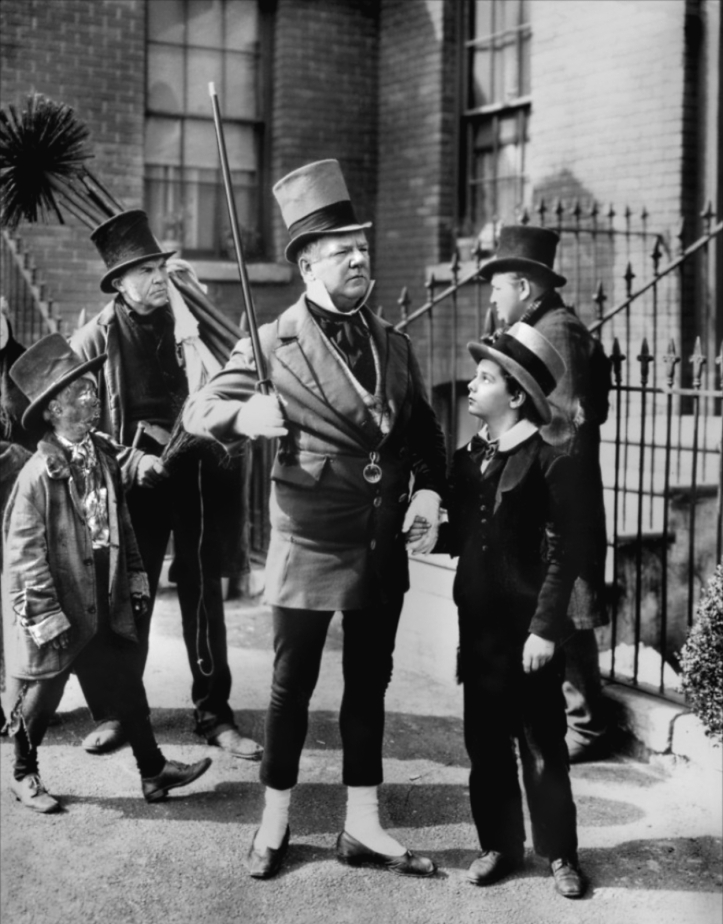 A quick post about an aspect of W.C. Fields’ film career that is not only often overlooked, but frequently even denied to exist. The claim is made by many (perhaps most) dilettante commentators on Fields (actors, comedians, fans — as opposed to writers and critics who tend to know better) that unlike so many other comic actors (Chaplin, in particular) Fields “never asks for our sympathy”. The idea derives, I suppose, from the cynical, crusty edge his character seems to have. But I assure you he deserves, seeks and receives our sympathy, almost always. This is demonstrable. It is baked into the stories and textures of his films. GROUCHO MARX never looks for sympathy, at least in the Paramount films (and very rarely in the MGM ones, and with painful results). But, Fields most assuredly does.

First, there is the moment by moment. The very situations are sympathetic. Fields is constantly berated: by wives, by children, by bosses, by strangers. He generally navigates this hostile universe with forbearance — hence our sympathy. You can read a subtext into it (resentment), if you like, because WE would resent it, but if it’s there, he seldom acts on it. The scenes where he takes his revenge on a child are memorable because they are rare and welcome. Normally his refrain is “Yes, dear.” This produces a tension, a comic suspense. We know that it will lead somewhere. But he’s not just some comedian, rollicking through a movie mechanically executing gags. He is a comic actor playing a role.

Secondly, some of his films contain actual moments and scenes of pathos, which he carries off with typical care and skill. Typically, and rather patronizingly, his performance as Micawber in David Copperfield (1935) is brought up in this context, but that’s far from the only, or even the best example of his straight acting. My favorite such scene is the pivotal one in You’re Telling Me (1934) (and also the silent version, So’s Your Old Man, 1926) when, having botched his own suicide, he walks back through the train car and encounters a Countess, whom he mistakenly thinks is about to try the same thing. He talks her out of it and confides his woes to her. I’ve heard so many commentators say “He never feels sorry for himself, or asks us to feel sorry for him.” Uh, nope! He does those things CONSTANTLY, and this scene is the supreme example. In Man on the Flying Trapeze (1935) his confidante is a secretary he tells his troubles to. At the end of It’s a Gift (1934) he has a moment where his family has left him, and he sits down on the porch of his shack alone, and broods with his head in his hands, a moment which can only be called Chaplinesque. And in so many of the films, there are the shared moments with a daughter character, his secret ally in the hostile home. At the end of Poppy (1936) and The Old Fashioned Way (1934) he has Griffith-like scenes of melodramatic self-denial where he skips out so that his child can have a better future without him — an actual martyrdom!

Fields’ clearly had an affection for the old time melodrama. He sends it up, of course, in The Fatal Glass of Beer (1933), and references it in a few lines in The Bank Dick (1940), but The Old Fashioned Way, in which he plays the head of an entire acting troupe, is his true tribute. (The part leads me to suspect how he great he would have been as Mr. Crummles in Nicholas Nickleby). It’s interesting to me. Fields’ interest in the theatre and its lore was vast; he was in it for three decades. But he had only done vaudeville, burlesque, revues and musicals. The “legit” was not part of his experience, though he clearly loved Shakespeare and John Barrymore became one of his best friends. And he had worked with D.W. Griffith.  He clearly had ambitions or dreams along these lines, and frankly it undergirded all of his work. To say there is no pathos in the work of W.C. Fields is to tip your hand to a superficial acquaintance with it.