Tribute today to Harpo Marx. Today’s post has been germinating for a long time. It grew out of lots of contemplation I did during Marxfest and the Fringe Production of I’ll Say She Is. It occurred to me that Harpo was the most original of the Marx Brothers. I think his grandfather, a magician, may have been an influence, but I’ve never come across mention of others — specific performers he watched and emulated in his earliest years. But I did think of a very few contemporaries who come kind of close to him in conception, and a few characters who came later who echo in some way the Harpo idea (just click on link for more information):

Before starting his famous Hollywood restaurant, Dave Chasen was the stooge to vaudeville and Broadway clown/comedian Joe Cook. Chasen wasn’t silent, he limited himself to a few phrases, uttered exuberantly in his thick Russian accent. But something about his personality reminds me the most of Harpo. He is “the cheerful idiot”, with a smile and a wave. You can see him do his thing in both of Cook’s features, Rain or Shine (1930) and Arizona Mahoney (1936). 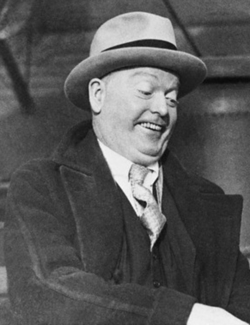 Clark and McCullough were the vaudeville and screen team who came closest in conception to the Marx Brothers: surreal, grotesque, clown-like and even a little scary. Unlike the Marx Bros. or Dave Chasen, there was nothing “ethnic” about them — they were a couple of midwestern kids whose earliest days were spent in the circus and burlesque. The cigar smoking, leering and wisecracking Clark was most similar to Groucho; McCullough was his stooge. Like Chasen, he wasn’t silent per se, but he rarely spoke, and usually just made a lot of idiotic faces and laughed his raspy laugh. He also always seemed to wear very large coats which seemed to swallow him up, another trait I associate with Harpo. Clark and McCullough made many comedy shorts for RKO in the early ’30s. You can catch some of them on Youtube.

Stage and screen comedian Ted Healy employed many stooges over the years beyond the three who became famous for their Columbia comedy shorts. Fred Sanborn appeared in vaudeville and Broadway revues with Healy and the others, playing a character who was more like Chaplin than Harpo. He was more silent than Chasen or McCullough. We never heard him utter a sound. But he was not a mute; he would just whisper into the other character’s ears. Unlike Harpo, Chasen or McCullough he also wasn’t idiotic or crazy — more winsome and poetic. You can see him with Healy and the Three Stooges in their 1930 vehicle Soup to Nuts. He left the act shortly after that film to focus on music. 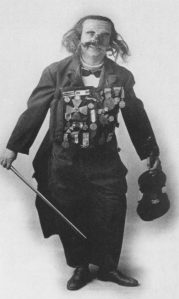 Much like a traditional circus clown, A Robins, the Banana Man used his voice in an unusual way, infrequently and in a high pitch. Mostly, he pulled a jaw-dropping number of things out of his magical coat, and this is how we feel he bears a resemblance to Harpo.

This character in the 1940 Disney film Pinnochio is mute, apart from three hiccups voiced by Mel Blanc. (His partner, the fox Honest John was portrayed by Walter Catlett)  The character is very much in the tradition of the idiotic, mute stooge, and reminds me more of McCullough perhaps more than some of the others.

Many of my my friends got to meet this great man and great comedian. I wish I had! Because I thought (too late) to ask him, “Was Harpo an influence?” After all, that disheveled, distracted look, the messy hair and the long coat and the way he walks into a room…and above all Harpo’s character in Animal Crackers: “The Pro-FESS-or!” Corey was far from silent — MOST talkative, in fact. But he reminds me a bit of Harpo.

This character from the Sid and Marty Krofft children’s  show The Banana Splits (1968-1970), was the silent member of the psychedelically costumed quartet. The other three were played by popular voice-over actors Paul Winchell, Daws Butler and Allan Melvin). Snork was a hairy elephant whose “voice” was a bicycle horn (not unlike Harpo’s taxi horn).

This guy — am I right? The “smaller, quieter half” of comedy/magic duo Penn and Teller is unique among stage mutes by not being stupid, broad, or crazy. Instead, he is cool, poised, sleek and intelligent — in fact, in the act he often seems to be the brains of the duo. He strikes me as more in the tradition of Buster Keaton, his silence an effect of economy and stripping-down. It’s almost as if he can’t be bothered to talk, or perhaps he might well decide to talk some day if there were ever anything worth saying, and so far there hasn’t been.

If you’ve thoughts about other similar silent partners in a talking universe, I’d be interested to hear!