Conlin and Glass: A Hilarious Couple 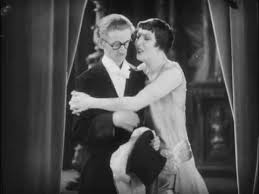 Originally from Camden, NJ, Conlin studied piano at the Philadelphia Conservatory of Music in his youth until the funds ran out. His show business education came in medicine shows. Around 1907 he married Philadelphia native Lillian G. Steele, his partner in the act Conlin and Steele. In 1910 they added Eddie Carr and became the trio Conlin, Steele and Carr. Unfortunately, both of Conlin and Steele’s children died and it placed stress on the marriage. The pair separated in 1915.

In 1916 Conlin partnered with Myrtle Glass in the act of Conlin and Glass; the couple married the following year. Conlin and Glass had a song, dance and comedy act that played the big time in the ’20s. Towards the end of the decade, they appeared in Vitaphones, such as the hilarious and still extant Sharps and Flats (1928) which gives us a nice record of their act, The Gladiator (1928, now lost), Zip! Boom! Bang! (1929, now lost), and A Tight Squeeze (1930), in which Conlin appeared without Glass. Glass appears to have retired around this time, and it’s a shame because she was a real talent, every bit Conlin’s equal. He played piano, she sang, and they both clowned around in a way that reminds me more of the Marx Brothers than anything else. Glass abuses Conlin, tears him to pieces essentially. I first saw Sharps and Flats at Film Forum and it made a deep impression on me, not just the team’s seemingly loose interplay, but the peanut gallery who keep chiming in from someplace behind the curtain. It’s that sort of loose, spontaneous atmosphere I always wanted to cultivate in my vaudeville shows.

In 1933 (right around the time the national vaudeville circuits died for good), Conlin started appearing in bit parts in feature films, a field in which he worked steadily through the end of the 1950s. He looked a little like Koo-Koo the Bird Girl, plus he was smart, funny and gave good line readings, all of which made him especially useful in comedy ensembles. He’s in the Myrt and Marge movie (1933), Arizona Mahoney (1936) with Joe Cook, the all-star The Big Broadcast of 1938, $1000 a Touchdown (1939) with Joe E. Brown and Martha Raye, My Little Chickadee (1940) with W.C. Fields and Mae West, nearly every single Preston Sturges movie from 1940 through 1947, Jitterbugs with Laurel and Hardy (1943), Swing Shift Maisie with Ann Sothern (1943), Lost in a Harem (1944) with Abbott and Costello, It’s a Joke, Son (1947) with Kenny Delmar, The Jazz Singer remake (1952) with Danny Thomas,  The Seven Little Foys (1955) with Bob Hope, and The 30 Foot Bride of Candy Rock with Lou Costello (1959).

Glass passed away in 1945 (ironic, given that she was 13 years younger than Conlin). Conlin then married a woman named Dorothy Ryan, formerly of the team of Dorothy and Rosetta Ryan. The two performed together as late as 1960. Conlin died two years later.