Some Things I Saw Whilst Gallery Hopping Yesterday

Yesterday, I happened to be rehearsing our new W.C. Fields show in the Chelsea area, which put me near the galleries! Having many errands to do, I managed to pop in and out of these arts spaces whilst I went about my busy day. Some of the things I saw:

This weekend will be the 50th anniversary of the founding of the Black Panthers. It also happens to be my wedding weekend, so it occurs to me I’ll probably have other things on my mind, so I post this today. The Steven Kasher Gallery has two shows up relevant to that anniversary. The title of Power to the People: The Black Panthers in Photographs by Stephen Shames and Graphics by Emory Douglas is almost self explanatory. The latter refers to the layouts and covers of the Black Panther’s newspaper, which are exhibited on a wall across from Shames’ photos. In the adjacent gallery are some contemporary photos and text: Ruddy Roye: When Living is a Protest, a powerful reminder that much remains to be done to bring about racial equality. Both exhibitions will be on view through October 29. For another relevant post about the Panthers, see my June article about one play and two films about the controversial political organization. 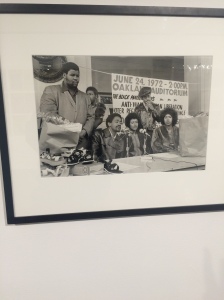 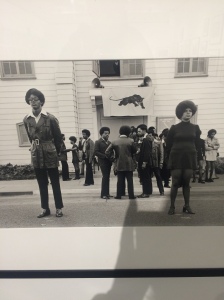 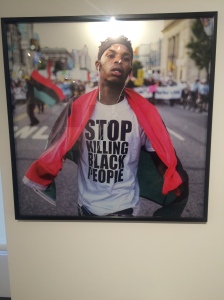 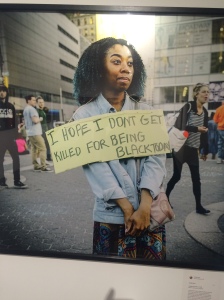 Next door at the Claire Oliver Gallery, I saw Judith Schaecter: A Life Ecstatic, an incredible series of light boxes made of stained glass and stainless steel, which seemed inspired by religious art, and yet not OF it. The images were more like the kinds of things you’d find in a naturalist’s or biologist’s text book : birds and fishes, infants (simultaneously evoking the Baby Jesus and a fetus), cross sections of skin with sweat glands, and the like, but all rendered like church windows or illuminated manuscripts. I found it interesting and beautiful. It is up through October 22.

At the Tagliatella Galleries I saw Brainwashed, a collection of paintings and other works by one “Mr. Brainwash”.  These were mildly amusing but facile mash-ups of familiar painting schools and quotations from recognized imagery, general thrusting together action painting, graffiti, and pop art, sometimes appropriating such obvious material as Warhol’s Marilyn or Grant Wood’s American Gothic. Both in concept and in execution these would need to go much further to justify their frivolity, though they are amusing and didn’t offend me — which can’t always be said. They’ll probably all sell for large amounts of money. Oh, and it’s “Sponsored by Stella Artois”. It’s up through October 16. 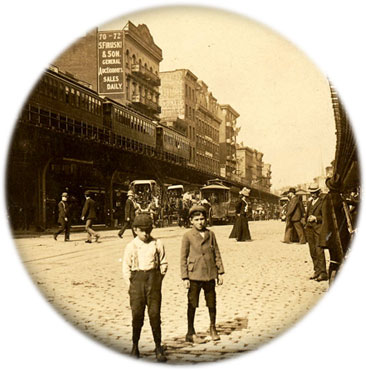 Then, over to Second Avenue, where at the historic Ottendorfer Library I looked in on The Bowery: Past, Present and Future on New York’s Oldest Thoroughfare, a very modest exhibition presented by my friends at the Bowery Alliance of Neighbors.  If you happen to be in the neighborhood, pop in and you will be rewarded with charming old photographs and some interesting collages of historic people and places. While perfectly nice, it’s probably too modest in scale to warrant traveling a great distance to see. It will be on view through November 10.

Cornelia Street Cafe is not just a great restaurant and jazz venue, but they also have a nice little gallery in the front of their space, where my friend Jim Moore had an opening for his new exhibition of photos Finding Solitude last night. Jim’s best known (at least in my world) for his photos of the clown, variety and theatre scenes, but he has also traveled the world. These beautiful black and white photos are mostly of architectural beauty in Italy, France and New York, all evoking “quiet space” — well worth a look. And while you’re there, eat a meal! I love that place! It’s up through December 5.

Lastly (this one is just a plug as I haven’t gotten there yet but hope to before it closes) there’s Molly Crabapple’s exhibition Annotated Muses at the Postmasters Gallery. It’s only up through October 15, so get there quickly!