The Marx Brothers and the Golden Age of Vaudeville! 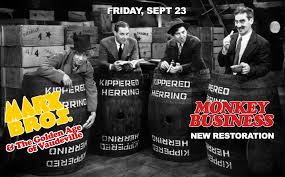 Opening tonight at New York’s Film Forum: an exciting screening series entitled the Marx Brothers and the Golden Age of Vaudeville. The curators actually seem to have lumped two series ideas together into one, but what care I? Both halves are well worth seeing.

If you’ve already seen the Marx Brothers’ classics to death, there are several reasons to attend this series anyway: 1) the films look better big; 2) the films laugh better with an audience; 3) several have been restored and are thus better looking prints, and, lastly 4) a couple of have a few seconds of previously missing footage restored. This last reason alone will make the Marx nuts come out in force, I know. Any new scrap of film containing  boys will be more than welcome. And September 25 our friends from I’ll Say She Is will be judging a Marx Brothers look-a-like contest!

As for the other films in the series, there are several programs of Vitaphone shorts of vaudevillians, including many previously unscreened ones, and that always gets me excited. And then there’s the recently restored Paul Whiteman movie The King of Jazz (1930) which I still have yet to see. I hope I get to make it over there! I’ll probably know everyone in the audience. It runs through Sept 29, with a kicker screening on October 25 of Vitaphone Varieties, Part 2. All the information is here.

To find out more about vaudeville, consult my book No Applause, Just Throw Money: The Book That Made Vaudeville Famous, available at Amazon, Barnes and Noble, and wherever nutty books are sold.