When, How and Why “Classic Comedy” Died 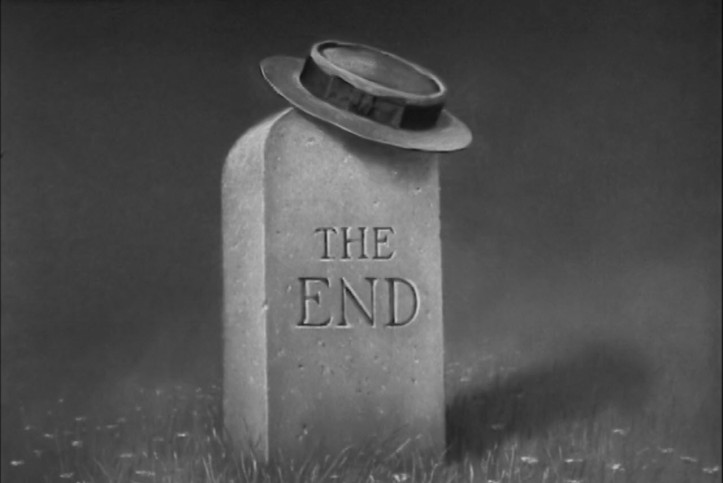 My aim in this post is to get a handle on my passionate (but until recently, too vague) conviction that “The 40s sucked! Comedy died by the late 30s!”

Right away clarification is in order, because after a moment one can immediately see that the opposite is actually just as true. One could argue that the greatest comedies EVER, by the likes of Preston Sturges, Howard Hawks, Frank Capra, Leo McCarey, and written by Billy Wilder and others, came from this era. But note just as quickly that these are all directors and writers. What I am trying to get at is that in these years the era of the great vaudeville comedy performer/auteurs of the silent and pre-code eras passed from the scene (people like Chaplin, Keaton, Laurel and Hardy, Mae West and the Marx Brothers) and were replaced with several formulaic and indifferently made comedy series.

Whenever 1939 is spoken of, as it so often is, as “Hollywood’s Greatest Year”, I often find myself saying “Yeah? Well, not for comedians!” Gone With the Wind, Stagecoach, and Wuthering Heights are among the year’s highlights. And yes, The Wizard of Oz  FEATURES incredible comedy but the star is Judy Garland. I saw a documentary about that year in film…the Marx Brothers are represented by At the Circus. Rather a sad showing in “Hollywood’s Greatest Year”, wouldn’t you say? Somewhere beneath The Private Lives of Elizabeth and Essex in prestige.

In fact 1939 was Year Zero for a major shift in how Hollywood approached comedy for the masses. Yes, there were “A” comedies by the admired directors and writers listed above, normally grouped into the genre called “screwball”.  But they also churned out comedies for the Great Unwashed, which were, in a word, less sophisticated. In the past, no such division had applied. The films of Chaplin or the Marx Brothers could be appreciated both by children and the most high-brow critic. Now things changed. 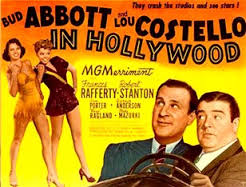 It has been my custom to lay all this at the feet of Abbott and Costello, whom I have blamed for everything from the Bubonic Plague to Global Warming. But dispassionate analysis reveals their atrocious films were part of a larger trend with numerous causal factors.

One was the diminishing exhibitor demand for comedy shorts. By the late 30s, almost all comedy shorts series had passed from the scene, with the exceptions of Our Gang at MGM, and the Three Stooges and some others at Columbia. Shorts were not just a vital incubator for the world’s best comedians, they were also in many ways the perfect and only effective vehicle for their talents. I can name scores of silent and early sound comedians who RULED in comedy shorts; the number who made watchable comedy features can be counted on one hand (I hope I don’t have to name them for you). And this is also true in the talking era. Laurel and Hardy knew this about themselves. While many of their shorts are masterpieces of comedy film, no Laurel and Hardy feature is a comedy masterpiece. They are essentially just shorts stretched and padded to feature length. Eddie Cantor’s and Joe E. Brown’s features, which largely adapted Harold Lloyd’s formula, are likewise largely padding. And this deficiency never vanished. I contend that shorts REMAIN crucial to certain kinds of comedy, and to this day most comedy films don’t merit feature length. For years, decades, as a general rule, the best realized comedy has been on television, whereas most comedy films have largely been something to endure and roll one’s eyes at.

You know what’s roughly the length of a two-reel comedy short? A sit-com! Perfect length for most comedies: 20-30 minutes. Which brings us to another major factor in the shift in comedy tastes in the ’40s: radio. That’s probably been my main revelation of this analytical process. Radio influenced films immeasurably during these years. The entire notion of a “series” starring the same cast playing the same characters seems heavily derived from the weekly format of the radio sit-com. In fact, watching these film series is very much like watching a kind of dry-run for television sit-coms a decade and more later. The Blondie series (1938-1950) with Penny Singleton and Arthur Lake, based on the popular comic strip, was simultaneously a film and radio franchise, as was Ann Sothern’s Maisie (1939-1947), and Fibber McGee & Molly/ The Great Gildersleeve (1941-1944). In 1939 and 1940, Jack Benny briefly transplanted his sit-com universe over to three popular films, but he seemed bored with the experiment; his subsequent films were regular star vehicles, often based on plays (and more in line with the prestige screwball comedies of the time, as were, for that matter the films of Bob Hope, with and without Bing Crosby).

The radio model is significant. A weekly show is disposable. It airs, people experience it, they forget about it, then tune in for the next one. Comedy films began to follow that format. Once Chaplin had made comedies after the fashion of D.W. Griffith, the model being a play or a novel, a substantial work of art to last forever. Now there appeared to be no higher agenda than to get your ass in and out the door of the cinema. 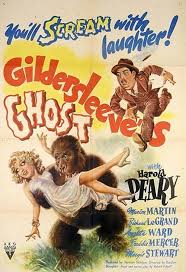 Also from radio came certain cherished plot material. Leaving much to the imagination, radio drama was especially adept at telling thrillers, mysteries and ghost stories. The mystery and spook comedy became a major “episode” idea for the comedy film series, as did the western spoof, and the spy story.

Other franchises grew out of the monster success of the lead characters in films initially not intended as series, such as Dead End Kids/ East Side Kids/ Bowery Boys (1937-1958), Mexican Spitfire (1939-1943), and Ma and Pa Kettle (1947-1957). The format of these films, too, seemed based on the radio sit-com plot model. 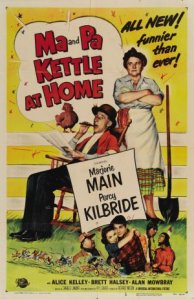 There is a tendency to regard the films of these series as “classics” because they are old, but to my mind, they don’t merit the same degree of veneration as the comedies of, say, Chaplin or Keaton, or the best of Mae West. I often cherish these B movies solely as historical objects, in the same way that we love vintage advertisements, fashions, and so forth. Generally I’ll find myself much more interested in what people are wearing or driving or what the set looks like than what the characters are saying and doing. Normally these movies will have their moments, but they are few and far between. Pound for pound the films are all filler, and by definition, dull.

The success of these types of comedies with audiences caused studios to now model their “comedian comedies” on the format, as well. The most successful example of this trend was Abbott and Costello (1940-1958), who also had a simultaneous radio show. Personally I enjoy the team in short format: their half hour tv sit-com, or on radio, in individual sketches in their films. At feature length I lose interest. Abbott and Costello are not actors. We don’t actually “care” what happens to their characters.  And so their films are padded out with secondary plots featuring boring romantic leads. Can anyone honestly tell me they WANT that? Yet, it seems it’s a heresy to say their movies are terrible. But they are! Whatever their (debatable) merits, the comedians are scarcely even in their own movies!

But Abbott and Costello movies were a hit with audiences. The doleful result was that studios began to try to shoe-horn some of their older generation classic comedians into the same format, the primary examples being Laurel and Hardy, whose comedies for Fox and MGM (1941-1945) are sad spectacles to behold, and the Marx Brothers, whose last two films for MGM Go West (1940) and The Big Store (1941) were grossly uncharacteristic (the obligatory western comedy and detective comedy). In both cases, the teams retired rather than continue to make such pictures. This is one principal reason why some classic comedy fans have such a grudge against this period in comedy films. It seems like the philistines have taken over.

The feeling is reinforced by the fact that these films coincide with the era in which the censorial Production Code was applied to its greatest extent (especially fatal to the career of Mae West), COMPOUNDED by the cultural conservatism of the War Years. Comedy needs freedom in which to breathe. Space to be irreverent is crucial to its existence. Every aspect of life needs to be on the table. Having major parts of human existence (sex, the body) be completely off limits is like shutting off a spigot of humorous potential (sorry, that was gross, wasn’t it?) As is the inability to poke fun of authority figures. War time is all about conforming, joining the effort, getting with the program, conserving resources. The movies of this period privilege these messages, which are the very opposite of hilarious. Most of the major franchises went so far as to have at least one army comedy, and one navy comedy, and there were also some air corps comedies. I don’t know about you, but I find almost all service comedies unbearably tedious, with their endless, repetitive, derivative “fucking up at basic training” scenes with some annoying sergeant character barking at the heroes. Give me Stanley Kubrick’s take on this topic any day.

One very interesting exception to all this. Contrary to all trends of the time, one old time vaudeville clown did his best and most lastingly popular work. The years 1939 through 1942 were years during which W.C. Fields did some of his most artistically rewarding screen work. But only a unique set of circumstances allowed it. Paramount had dropped the physically ailing Fields, but his success on radio gave him the juice to throw his weight around at Universal. Further, he was successful on radio only as a guest star, which meant he didn’t need to drag some stupid sit-com formula along with him.For a while anyway he had a blank check to write whatever crazy, surreal, one-of-a-kind screenplay he wanted for himself to star in. AND he was too old to do some dumb comedy about getting drafted. AND his whole thing was to tell busybodies to fuck off. So we’re spared in those movies from the stultifying conservatism that mars most other comedies of the time. But Fields died in ’46, and much that was good died with him.

The Cold War proceeded to inhibit American comedy-making for almost two more decades. And then, in the late 60s, a new generation discovered the rebellious glories of Fields, the Marx Brothers and Mae West again. And new ways were found to bring irreverence (if not vaudeville precisely) back to the big screen.