On the Marx Women

Continuing our little series of posts celebrating the re-launch of I’ll Say She Is, today a look at the Marx Brothers’ wives. But first we begin with the most important Marx Woman of all — 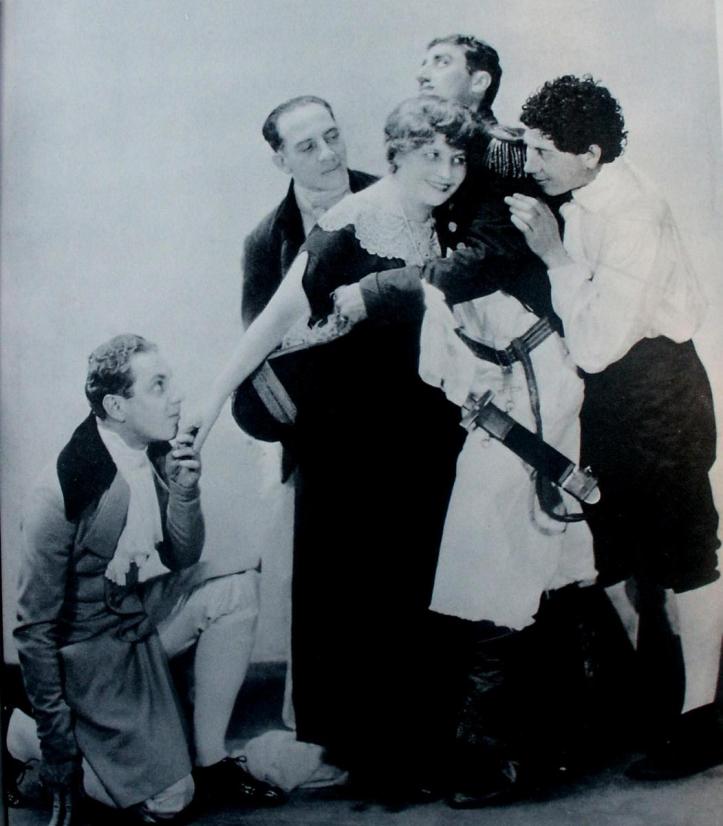 “I Want a Girl (Just Like The Girl Who Married Dear Old Dad)” goes the old Tin Pan Alley tune. But it is amusing how little the Marx Brothers seem to have have lived this song, despite the epic extent to which they all adored their mother.

Not only did Minnie give birth to the boys, she can truly be said to have given birth to their act. Her parents Fanny and Lafe were itinerant performers themselves (a yodeling harp player and magician/ventriloquist respectively), and her brother was the famous vaudevillian Al Shean. The extended Schoenberg family were very much in the Marx Brothers lives and influenced them tremendously. Groucho was a mere boy when he resolved to go into show business, and Minnie instinctively became a very involved stage mother. As each of the brothers joined the act, she became their manager and remained so until they finally made it big. At a certain stage she was even in their act.

Minnie is famous in the lore of the Marx Brothers for being a crazy eccentric, the sort of woman who wore a wig and then took it off in front of everyone at card games to air out her sweating scalp. Physically, she is said to have resembled Chico and Harpo. Thus we are not terribly surprised to learn that none of the women the Marx Brothers’ married seems anything like the one-of-a-kind Minnie. They seemed to prefer beautiful, glamorous women (go figure!), in the majority of cases, gentiles.

It is another cherished fact of Marxian lore that the tom-catting Chico became the first brother in the family to tie the knot. A pretty teenage fan from Chicago when he met her, Betty Karp lived amongst the chaos of the large Marx family (including a domineering mother and several handsy, oversexed Marx men) after she officially joined it in 1917. The most “traditional” of the Marxian wives, Betty suffered a quarter century of Chico’s infidelity and the gambling away of all his paychecks before he threw her over for Mary De Vithas (who resembled her) in 1942. Chico and Betty had one child, Maxine, who was to write a memoir about life with her dad.

“Mary Dee” was the actress who became Chico’s main squeeze in 1942 while he was still married to Betty. They didn’t make it legal until 1958, three years before Chico passed away.

Harpo married late, but he married well. For my full post on the beautiful chorine who became Mrs. Harpo Marx, go here.

The second woman to enter the Marx family, like Betty she came along in plenty of time (1920) to be part of the whole extended brood, parents-in-law and all. The Swedish-American Johnson was initially Zeppo’s girlfriend and dancing partner in the act, but Groucho unceremoniously stole her from his little brother. They had two children: Arthur, who became a successful writer, and Miriam, whose life was overshadowed by substance abuse problems.

Groucho’s marriage to Ruth set a sort of template for all his relationships. While not the womanizer that his brothers were, he tended to be mean, dismissive and sarcastic, and often made jokes at his wife’s expense — in front of (often famous) company. Ruth became an alcoholic, which, ironically Groucho used as an excuse for leaving her in 1942.

The wife of the most famous Dead End Kid Leo Gorcey, Kay fled her abusive husband and crashed at Groucho’s house because she was friends with his daughter Miriam. Groucho flipped for the gorgeous refugee and they were married in 1945. She would be the first of many “May-December” romances for him. But for poor Kay, it was to be a case of “out of the frying pan, into the fire”. Groucho was no wife beater, but his cutting criticism was relentless. Kay was to be the second of his wives that he drove to drink. The pair divorced in 1950. The marriage produced one daughter, Melinda, the rare Marx child to follow her father into life as a performer (although she did it mostly at her father’s instigation and abandoned it when she grew older). 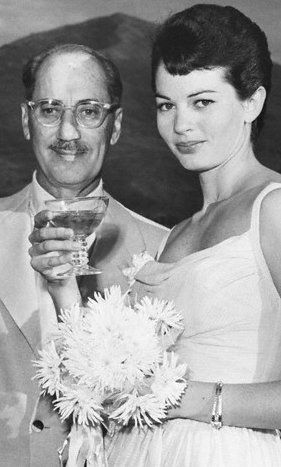 Eden was the sister of Dee Hartford, Howard Hawks’ wife, whom had appeared with Groucho in A Girl in Every Port (1952). Meeting Eden on the set one day, Groucho fell hard and they tied the knot in 1954. Eden was also an aspiring actress, although she had little success in that line. One of her most notable credits is an appearance as an Indian girl in Groucho’s Peter Minuit sketch in The Story of Mankind (1957). In 1969, Eden filed for divorce on the by-now-predictable grounds of “extreme cruelty”.

The inclusion of Fleming here will rankle some; the pair were not married, the best that might be argued was a burgeoning common-law status. She was the personal assistant who came into Groucho’s life around the time of the divorce from Eden and wormed her way into his heart, ultimately becoming an apparent Svengali figure — one who might be thought of as having brought a little karma to Groucho’s life by being cruel and abusive to him. An account of these years is best read in Steve Stoliar’s tremendous book Raised Eyebrows.

The kitschy valentine is because I could find no photo of the lady in question — not even in a group picture of the entire family. Not surprising, as she was the retiring wife of the most retiring Marx Brother. Previously I had been guilty of jumping to the forgivable conclusion that she was related to the Tin Pan Alley songwriters Albert and Harry Von Tilzer. But it turns out that A) Helen’s maiden name was Theaman. Her first husband’s last name was Von Tilzer, and he was no relation to the songwriters, because B) the songwriters’ real last name was Gumbinsky. Leaving Gummo’s wife even more obscure than she was previously. The pair married in 1929, just as the boys were getting a foothold in the movie industry; Gummo eventually became a big time agent. 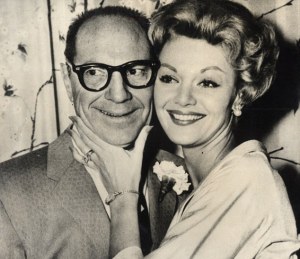 Undoubtedly the most famous Marx spouse of all, owing to the fact that her third and last husband was the Chairman of the Board Mr. Frank Sinatra. The lady who became Barbara Sinatra was born Barbara Blakely. Prior to marrying Zeppo in 1959, she had been a Las Vegas showgirl and a model, and had married and divorced a beauty pageant executive. According to her autobiography, Zeppo was jealous, possessive and rough with her. She started seeing Sinatra on the sly. She divorced Zeppo in 1973 and married Ol’ Blue Eyes in 1976. But the trio remained friendly and Barbara helped Zeppo through the ordeal of fighting the lung cancer that eventually killed him in 1979.

For info on I’ll Say She Is, go to : www.illsaysheis.com