On the “Gold Diggers” Series

Today is the birthday of Jazz Age playwright Avery Hopwood (1882-1928). Hopwood was long legendary for the feat of having four successful plays up on Broadway simultaneously, a feat later equaled by Neil Simon.

We have already done an extensive blog on one of the plays Hopwood was associated with, The Bat (1920), although that was primarily a Mary Roberts Rinehart work (Hopwood was called in to finish the third act and doctor the play overall). Today it seems apt to talk about what is now by far Hopwood’s best known legacy: the many versions and incarnations of The Gold Diggers. The best known one Gold Diggers of 1933 has a zillion fans even to this day; but folks may not realize that there was much that came before and much that came after. 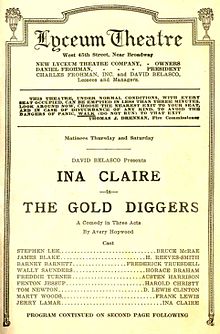 The concept of the “Gold Digger” was a major part of the zeitgeist during the Jazz Age, when prosperity made for much gold to be dug. The phrase seems initially to have been applied to Peggy Hopkins Joyce, whose many marriages just happened to be to wealthy husbands. It’s not like such scheming isn’t as old as humankind. What was new about Joyce was the unprecedentedly open and frank way that she pursued her goals. Welcome to America! This was a new phenomenon. It inspired many writers, from Anita Loos’s Gentlemen Prefer Blondes (1925), to several characters in Fitzgerald.

Hopwood’s The Gold Diggers was early in this cycle. It gives us the familiar kernel of the story: a chorus girl and a rich young man want to get married. Relatives disapprove and try to put a stop to it. Hypocrisy is exposed through funny stratagems, and it is demonstrated that the chorus girl really loves the rich young man (thus proving she is not a heartless monster). The original lead was played by Ina Claire, and the production was a smash hit thanks in part to rave reviews by Alexander Woollcott.

David Belasco, original producer of the play, also produced the first film version, starring Hope Hampton and Louise Fazenda. Like later versions it was made by Warner Brothers. Sadly the film is now lost. 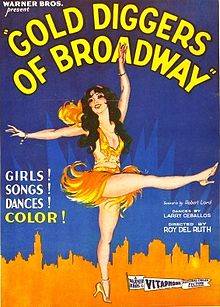 This is the unkindest cut of all. This one is partially lost yet just enough has survived to drive us crazy wishing we could see the rest of it. The earliest years of talkies left us some really incredible documents because of all sorts of factors which capture their moment in a way that Hollywood films which came before and after would be unable to do. Sound (Vitaphone)! Color (Two Strip Technicolor)! More realistic dialogue (Pre-Code)! For the first time Broadway spectacle could be brought to the screen in a way that made sense — and so they went at it, whole hog. Here’s a fragment:

It was the top grossing film of the year and made a screen star (for a time) of Winnie Lightner. Also in the film were Ann Pennington, Nick Lucas (who sang the version of “Tip Toe Through the Tulips” that later inspired Tiny Tim), Lee Moran, and Louise Beavers. It was directed by Roy Del Ruth, who was to marry Lightner a decade later.

Not a sequel per se, but yet another re-make with a new added poignancy (and sympathy for the heroines) because it is the depths of the Great Depression and the girls are literally starving. This (as far as we know) is the apex of the series, though one dreams about Gold Diggers of Broadway.

Co-directed by Mervyn Leroy and Busby Berkley (musical numbers), and produced by Warner Brothers in much the same style as 42nd Street, which had been released just a couple of months earlier, and with much of the same cast (Ruby Keeler, Dick Powell, Ned Sparks, Ginger Rogers, and Guy Kibee). Sparks plays a producer who needs cash to put on a musical about the Depression (1933 was the very worst year of that worldwide financial disaster). Songwriter and juvenile Powell turns out to be a Boston Blueblood and underwrites the show — which (thanks to Berkley’s amazing staging) turns out to better than anyone’s wildest fantasies of a live stage show could ever be. Unfortunately Powell’s conservative brother and trustee (Warren William) and family lawyer (Kibee) want to break up his romance with Keeler. As they try to do so, gold-diggers Joan Blondell and Aline McMahon kick into action and eventually get both fuddy duddies to marry them. And a pre-Astaire Ginger Rogers is yet another gold digger. Happy ending, roll credits.

Some but not all of the luster is lost here. Here Dick Powell is a hotel clerk hired by miserly millionairess Alice Brady to escort her daughter Gloria Stuart. They fall in love though she is actually engaged to a doofus who is writing a monograph on the use of snuff (Hugh Herbert). Meanwhile, because this is a musical, the millionairess is bankrolling an annual charity show for the milk fund, and hires a wacky Russian stage director played by a very funny Adolph Menjou. It’s Busby Berkley’s first film as credited director, though of course he had choreographed many times before. The big number is “Lullaby of Broadway”: it’s brilliantly staged and shot, even surreal—it all takes place in her head, and has an amazing fantasy interlude. Of course it’s all apropos of nothing connected with the movie we’re watching!

This one has the morbid plot of producers and cast taking out a life insurance policy on hypochondriac moneybags Victor Moore so they can finance a show. With the now married team of Dick Powell and Joan Blondell returning, the picture also features Glenda Farrell and even more notably Susan Fleming (better known as Mrs. Harpo Marx). Busby Berkley staged the production numbers once more and Lloyd Bacon directed.

It’s always been an axiom of mine that you know your franchise has jumped the shark when you have to transplant it to another country for an angle. By these last couple in the series, it is becoming quotidian and a little tired (reminds me of the plots of some of the Fred and Ginger movies). The meat of the farce is that Hugh Herbert is sent to New York to bring back a certain ballet company to Paris. He accidentally books a bunch of chorus girls who work for Rudy Vallee and Allen Jenkins. Learning the truth too late, he hires Fritz Feld and Rosemary Lane to teach the girls ballet on the ship back to France. The fly in the ointment is that one of the French bookers (Melville Cooper) wants to watch rehearsals, and the company has to keep diverting him. The stakes in a scenario are too low to interest me. Give me the early “Gold Diggers”! Seems like the public felt the same way.