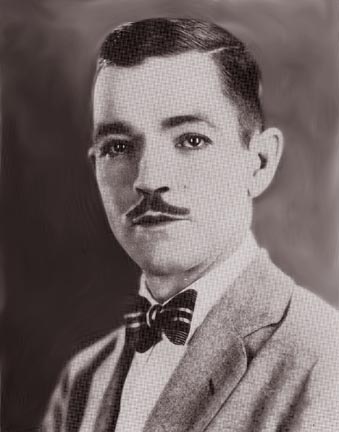 Whining, whimpering, simpering Johnny Arthur (John Lennox Arthur Williams, 1883-1951) is best known to classic comedy fans today for playing Darla’s father in several Our Gang shorts in the 1930s. By then he was mainly a supporting player, but in earlier years he had often starred in films, and not always comedies. Arthur’s character was often (even usually) swishy, effeminate types, often fussy clerks, but also hen-pecked husbands and even (in the Pre-Code era), implied homosexuals. His pencil neck, wispy mustache, and petulant manner all served him well in the characterization.

He’d been appearing onstage for nearly a quarter century when Roland West gave him a part in the now-lost science fiction feature The Unknown Purple (1923). In 1925, Arthur starred alongside Lon Chaney in West’s The Monster, as the hero, a young clerk who wants to be a detective, investigating a series of disappearances around a sanitarium. Later that year, he began to star in comedy shorts for Educational Pictures, most of them directed by Norman Taurog or Roscoe Arbuckle (under the pseudonym William Goodrich).

In the sound era he was a supporting player in features: you can see him in such classics as Dames (1934), The Ghost Walks (1934), and Crime and Punishment (1935). Films for Hal Roach included Our Relations (1936) with Laurel and Hardy, and several Our Gang Shorts.  He’s in Mae West’s Every Day’s a Holiday (1937), Frank Capra’s You Can’t Take it With You (1938), Hope and Crosby’s Road to Singapore (1940), the exceedingly weird all-star Li’l Abner (1940), and Fred Allen’s It’s in the Bag (1945). I am particularly intrigued by a 1943 Roach film called Nazty Nuisance, a satire on the Axis Powers in which he plays a stereotypical Japanese character by the name of Suki Yaki. His last credit was in the 1947 classic It Happened on Fifth Avenue, directed by Roy Del Ruth.

He passed away four years later, an apparent pauper, and was buried on charity funds in an unmarked grave. Thanks to the generosity of fans, he finally got a headstone in 2012.

To learn more about comedy film history don’t miss my book: Chain of Fools: Silent Comedy and Its Legacies from Nickelodeons to Youtube, just released by Bear Manor Media, also available from amazon.com etc etc etc. For still more on show biz history, consult No Applause, Just Throw Money: The Book That Made Vaudeville Famous, available at Amazon, Barnes and Noble, and wherever nutty books are sold.