Kennedy might be a more appropriate entry in our Hall of Hams series, for she was not a rank and file, day-to-day vaudevillian. When she appeared at the Palace in 1929, it was as a well established star of stage and screen. She had a dozen starring Broadway parts from 1912 through 1932; and three dozen movie roles from 1917 to the end of the silent era.

Her best known early role was the title role in the Broadway smash Poppy opposite W.C. Fields which ran from September 1923 through June 1924. It was the show that put Fields on the map. Unfortunately when D.W. Griffith made the film version Sally of the Sawdust in 1925 he saw fit to recast Kennedy with his paramour Carol Dempster. 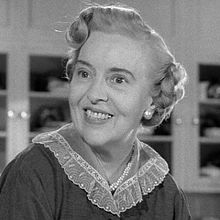 Radio kept her goung through the ’30s and ’40s. In the 50s she was in demand again on film and television, now reinvented as an “old lady”. I was delighted to learn this morning that she played the recurring part of Aunt Martha on Leave it to Beaver (1957-1963), in that hilarious repeating plot where the fussy, old-fashioned relative would come to visit the Cleavers, always cramping Beaver’s style. Alfred Hitchcock employed her many times on Alfred Hitchcock Presents (1956-1961) and The Alfred Hitchcock Hour (1962) and in a small role in North by Northwest (1959). She has quite decent roles in The Catered Affair (1956) and Lust for Life (1956), and you can see her on screen as late as They Shoot Horses, Don’t They? (1969), The Day of the Locust (1975) and Marathon Man (1976). I shall take care to take much more notice of her now in those roles now that I know that she was the original Poppy!