Ann Miller: From the Cradle to the Grave 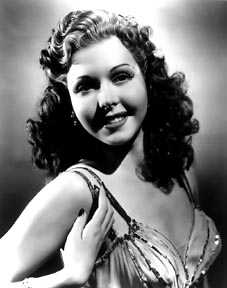 Born in Texas, her father was a lawyer who defended Baby Face Nelson and members of the Barrow Gang. Her mother was half Cherokee. Mr. Collier was said to be a philanderer; the couple split around 1932. Mother and daughter settled in San Francisco, where the child, only nine years old, but highly talented and already trained, began to dance in night clubs like the Bal Tabarin and the Black Cat Club. There she was spotted by Lucille Ball and Benny Rubin, who brought her to the attention of RKO who signed her to a contract at the age of 13, though the studio purportedly thought she was 18. Watching romantic scenes in her earliest films nowadays can make for definite icks. On the other hand, there were good aspects. Her freshness and perkiness and energy are all facets of the fact that she was a literal child.

Though she came along too late for vaudeville, her primary skill — tap dancing — was still in vogue, and the Hollywood musicals she starred in through the mid 1950s are imbued with a good bit of vaudeville spirit. Her role model was said to be Eleanor Powell. Miller was cast in a chorus parts for her first couple of years, though she got a solo turn in New Faces of 1937.

She was only 15 when she began to get decent speaking roles in pictures. Interestingly two of them were George S. Kaufman comedies: Stage Door (1937) and You Can’t Take It With You (1938), and one was with the Marx Brothers, Room Service (1938). This is almost like stage experience. All three of these movies were adaptations of Broadway plays, and cast her alongside plenty of stage veterans. Wisely, she then GOT some proper stage experience, appearing in George White’s Scandals of 1939 on Broadway for three months. 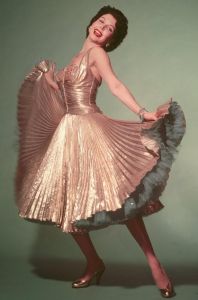 Her next picture was the all-star variety revue Hit Parade of 1941, which showcased her alongside Kenny Baker, Frances Langford, Mary Boland, Hugh Herbert, Patsy Kelly, Phil Silvers, Franklin Pangborn, and Borrah Minevich and his Harmonica Rascals. Then came the western musical Melody Ranch, directed by Joseph Santley, with Gene Autry, Jimmy Durante and Gabby Hayes. Time Out for Rhythm (1941) cast her with Rudy Vallee, Rosemary Lane. and the Three Stooges. Towards the end of the decade she began to star in movies that are now regarded as classics Easter Parade (1948) with Judy Garland and Fred Astaire, On the Town (1949) with Gene Kelly and Frank Sinatra, Watch the Birdie (1950) with Red Skelton, and the screen version of Kiss Me, Kate (1953).

In the mid 50s her movie career abruptly wound down, although she continued to work on stage and on television. In the late 60s, she replaced Angela Lansbury in the original Broadway production of Mame. In 1970 she appeared in a made-for-tv version of Dames at Sea , also starring Ann-Margret, Fred Gwynne, Anne Meara, and Dick Shawn. And perhaps most memorably she starred in Sugar Babies with Mickey Rooney on Broadway and on tour from 1979 well into the 1980s. When I was a kid I rolled my eyes at the tv commercials for this show (it’s quite automatic, I can’t not roll my eyes if Mickey Rooney is mentioned) but in retrospect I’m sorry I missed it — it was one of the last chances to see a top performer from the classic days of show business, live, on stage.

A small role in David Lynch’s Mulholland Drive (2001) was Ann Miller’s bizarre last hurrah. At that point , she had been  in show business for nearly 70 years.

To learn more about show business history, consult No Applause, Just Throw Money: The Book That Made Vaudeville Famous, available at Amazon, Barnes and Noble, and wherever nutty books are sold.