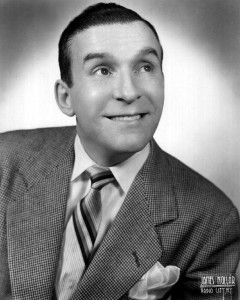 Today is the birthday of Pat Harrington, Sr. (1901-1965).  This performer came onto my radar just a few weeks ago, when his better known son Pat Harrington, Jr. (of The Steve Allen Show, One Day at a Time, and Vlasic Pickles commercials) passed away.

Originally from Quebec, Harrington was a song and dance man in vaudeville and night clubs prior to ascending to the arena where he made his biggest mark, Broadway, where he was in the original productions of Panama Hattie (1940-1942), Star and Garter (1942-1943), and Call Me Madam (1950-1952), among other shows. His screen career was more modest, with two films and a half dozen tv appearances to his credit.

I just found this jewel: the NYPL has the audio of an interview Harrington gave in 1961, in which he talks about working with Bobby Clark in Star and Garter. Discover it here.

To learn more about  old school show biz especially vaudeville, consult No Applause, Just Throw Money: The Book That Made Vaudeville Famous, available at Amazon, Barnes and Noble, and wherever nutty books are sold.