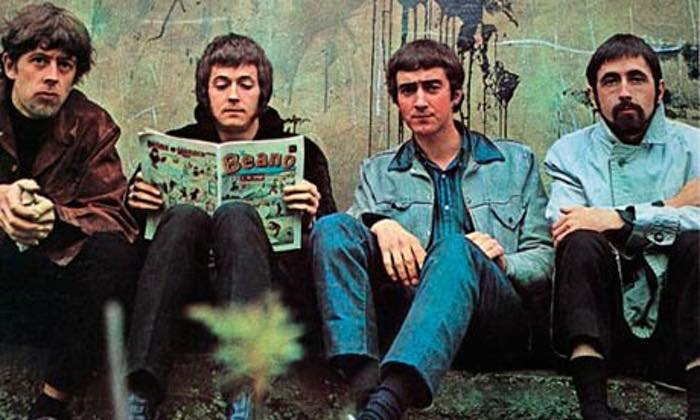 July 22 of this year will mark the 50th anniversary of the seminal 1966 album John Mayall’s Bluesbreakers with Eric Clapton. The album had been recorded in March of that year; this Sunday, Alexis Moon and The Suns will get a jump on the celebration by performing the entire album live at The Treehouse at 2A.

Most people vaguely know of the Bluesbreakers as a footnote – – several of its alumni went on to fame with bands that achieved mainstream chart success: Eric Clapton, who went on to Cream, Derek and the Dominoes and a solo career; Peter Green, Mick Fleetwood, and John McVie, who formed Fleetwood Mac; and Mick Taylor, who was the first replacement for Brian Jones in the Rolling Stones. The Bluesbreakers’ initial incarnation lasted from 1963 through 1967. The personnel for the album in question (the group’s second) included singer, keyboard and harp player John Mayall; guitarist Eric Clapton; bassist John McVie; and drummer Hughie Flint. Clapton got special billing because he was already a legend by that point. He had left the popular Yardbirds earlier that year especially so he could play blues with Mayall (he’d objected to the pop psychedelic direction of the Yardbird’s 1965 hit single “For Your Love”). Clapton proved too contrary even for the Bluesbreakers though — that’s him reading a “Beano” comic on the album cover photo above; he said he’d did it as a rebellious gesture. (Many people refer to this record as “the Beano album” rather than by its unwieldy, uncatchy proper name.) And of course he left the band right after this to found Cream.

John Mayall’s Bluesbreakers were at the leading edge of the second wave of the British Blues Boom. Many of the key groups of the first wave, such as the Yardbirds  and the Rolling Stones, had broadened their mandate by including soul, pop and rock ‘n’ roll in their repertoire, and achieved scads of hit singles as a result. By contrast, the second wave bands were purists, relatively speaking. They were like a branch of the folk movement: very earnest, very serious, and very committed to authenticity and technical virtuosity, even at the expense of mass commerciality. It was these bands John Lennon was affectionately parodying in his 1968 song “Yer Blues”, although the song and his performance are so raw and brilliant there is a tendency to regard it as straight up homage. (Contrast it with, say,what the Bonzo Dog Doo Dah Band or Frank Zappa might have done with a similar assignment). When Lennon performed “Yer Blues” live with Clapton, Keith Richards and Mitch Mitchell in 1968 on The Rolling Stones Rock and Roll Circus it was an example of life imitating art.

Of course the musicians of the British Boom were imitating someone themselves: the original black American blues artists. I’ve profiled close to 100 of them in the Blues section of Travalanche. (I first got interested in the music by my brother who played in a number of blues bands when I was growing up. He played drums in a trio with the great Duke Robillard; often sits in with Roomful of Blues; and even once backed John Hammond Jr.  I haven’t queried him but he is just the right age to have been heavily influenced by the Bluesbreakers and the album in question, and he brings the same kind of purism to his playing. On some level, he is why this blogpost even exists.)

The selections on  John Mayall’s Bluesbreakers with Eric Clapton include songs by Little Walter, Freddie King, Robert Johnson, Ray Charles, Otis Rush, Mose Allison, et al, and some originals by Mayall and Clapton. One tune, “Steppin’ Out”, is closely associated with Memphis Slim.

Sunday’s line-up includes Alexis Thomason (vocals), Keith Hartel (lead guitar), Charles Roth (keyboards), Tom Shad (bass), and Ray Kubian (drums). I got to hear some of their rehearsal the other day: they were duly amazing. The photos below are from that session. Thomason and Hartel sat down with me for a little interview right after:

Trav: How did all this come about?

Alexis: Tom Shad brought us together. I’ve known Tom for almost 20 years; we both performed with Joe Gallant’s Illuminati Orchestra. With various line-ups, we’ve done tributes before, including David Bowie and Hüsker Dü. It was Keith’s idea to do one for the Bluesbreakers album.

Keith: This is something I’ve always wanted to do. Rock and roll lead guitar playing is blues based. This is the album that started that and no one ever really topped it. It’s really a rock album. Eric Clapton was already a major blues players but he had quit the Yardbirds and lived at John Mayall’s house for a while and had access to his record collection. He studied very deeply and listened to a lot of people he hadn’t listened to before. This is largely a record of him absorbing a lot of that stuff. Also, Clapton was playing a 1960 Les Paul, which had been discontinued, and playing it through a Marshall amp, which was brand new at the time. So this was the first time this particular sound, which we’re all so used to, had ever been recorded. And afterwards, everything sounded like that. This album was ground zero for that sound. Also, this material was originally recorded in live performance with Jack Bruce on bass, but the recording came out badly, so they re-did it in the studio. So it’s structured as a perfect set of music.

Trav: It’s interesting to hear it with a female singing vocal; reminds me a little of Big Brother and the Holding Company (though with a better band).

Alexis: I love Janis Joplin!  I think it’s fair to say rock and roll has a masculine energy. I feel comfortable with that kind of male energy. It doesn’t feel foreign to me. I don’t mean that so much in the sense of gender; it’s just that, man or woman, you just have to have balls. I listened to both Mayall and Clapton’s vocals. They’re so steeped in blues. I’ve been working on nailing the chromaticization and phrasing. It’s so quirky.

Trav: What were some of the challenges?

Keith: Trying to get everything “as is”. Clapton’s method was to steal people’s licks, all these stock gestures that he would put together. He was the first person to turn it into rock. He was very much into Freddie King at this point. The interesting thing about this album is that those sounds hadn’t yet been “rockified”. But if was influential. Jimi Hendrix was a fan, he famously sought Clapton out when he came to England. Jeff Beck bought a Les Paul when he heard this album. But it’s under-appreciated now because everyone emulated it, so now everything sounds that way. This album is not yet as freaky or far-out. It’s about discipline and tradition. Clapton created a vocabulary out of all this archetypal stuff.

Trav: What’s your favorite song in the set?

Keith: “Little Girl”. It’s one of the originals. You can hear influence that would lead to stuff like Cream and Led Zeppelin.

Alexis: And it’s so fun to play!

Alexis: We’re hoping to do more than one show of this set. Also, I’d like do some psychedelic rock, but to come at it from the other end, less in the hippie jazzy Grateful Dead sense (which I’ve done and I love) but harder. Maybe something like Pink Floyd’s Piper at the Gates of Dawn.

That’s another show I’d like to see. Alexis Moon and The Suns will be performing John Mayall’s Bluesbreakers with Eric Clapton at the Treehouse at Avenue A (25 Avenue A) this Sunday (January 17, 2016). The show will begin with an opening set by Hugh Pool at 9pm.