Moran and Mack are “HYNPOTIZED” 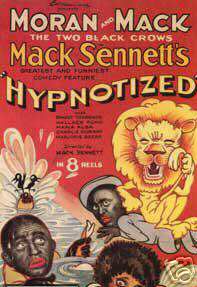 Today is the birthday of Charles Mack (1887-1934), the senior and more comical member of the blackface** vaudeville comedy team “Moran and Mack”, a.k.a. “Two Black Crows” (for more on the team see my original post here). In observation of the day (we can hardly say “honor”) we dredge up the team’s 1932 feature Hypnotized. (The offensiveness of blackface is a given. We write about that aspect of the practice here frequently. All the more reason for it to be evaluated and studied as a bellwether of the attitudes we hope to extinguish).

This is Mack Sennett’s last feature, and to watch it is to watch the reason why. Sennett was a great, even inspired producer and studio chief, and the Godfather of the American Comedy film, so I am of course saddened that his studio went out of business in the mid ’30s. But that he stopped directing? I’m okay with that. Normally his thing was shorts (i.e., short films, not underwear, although the latter could occasionally be pressed into play in the service of the former). But occasionally he did pull together the wherewithal to make a feature and some of them were fairly significant and have aged as well as can be expected: Tillie’s Punctured Romance (1914), A Submarine Pirate (1915), Mickey (1918), A Yankee Doodle in Berlin (1919), A Small Town Idol (1921), and The Shriek of Araby (1923). But by 1932, Hollywood studio product had gotten pretty slick, and Sennett, who had learned his craft around 1910 hadn’t really progressed as a director to match the times. If he had continued directing, my guess, based on this film and others, like The Timid Young Man (1935) with Buster Keaton, is that later films with Sennett at the helm would have been something like those of guys like Jean Yarbrough, William Beaudine or at best Norman Taurog: butchery-hackery in the service of good-natured but idiotic dreck.

Hynotized has a top flight cast (in addition to the titular stars there are Wallace Ford, Charlie Murray, Ernest Torrence, and Marjorie Beebe), a fairly good script, and professional (expensive looking) sets and settings. But the direction and editing are très primitive; it simply looks and sounds technically shabby. At this juncture (money woes caused by the Great Depression combined with a critical attitude on the part of the audience towards film folks from the silent era), Sennett couldn’t afford reputation-wise to put this sort of product out.  It can’t have helped him any to secure directing work when his studio folded. (And it didn’t. He got to direct some shorts at low rent Educational Pictures, then they too went out of business. After that, Sennett couldn’t even get arrested.) So you can see why this movie is so obscure today. The ineptitude, combined with the now socially disfavored blackface, render Hypnotized unwatchable by most contemporary standards as anything but a historical curiosity. (I was amused to see that a company that sells the film on DVD uses the attractive lure, “It’s not nearly as bad as people say it is!”) But as a historical curiosity, it is well worth watching.

Anyway, it’s set in a circus. Ford plays an elephant trainer who falls in love with a gypsy princess singer (Maria Alba). At first he’s nasty and surly but then he wins a horse race and now he’s emboldened to tell the girl how he feels. Charlie Murray is the circus owner and ringmaster. He arranges big public circus wedding and sells tickets to it. Then Ford never shows up. The girl is devastated. Murray escorts her back to Europe on an ocean liner. Then they spy Ford and his sidekick (Charlie Mack. Though this is billed as Moran and Mack vehicle, the former is scarcely in the film at all, a factor of their constant squabbling). It turns out Ford and Mack were hypnotized and enslaved by an unscrupulous hypnotist (Torrence) and employed as his assistants. (Vaudeville trivia: That line which the hypnotist uses when he mesmerizes someone, “Rigid!” would have been recognized by audiences at the time as the signature of stage hypnotist Pauline.) Now that Ford and Mack are found, there is all sorts of running around the ship business, it gets quite crazy. People keep falling into swimming pools. Finally it all sorts itself out as comedies do.

The irony is that Hypnotized fails at the main thing we’re hoping to get out of all this, which is a proper peek at the vaudeville team of Moran and Mack. Like many a desperate producer, Sennett hired the team to exploit their fame without adding to it. The movie needed to be as good a showcase for the their reputed talents as their comedy records. In the end, it is only a curiosity.

To learn more about comedy film history please check out my new book: Chain of Fools: Silent Comedy and Its Legacies from Nickelodeons to Youtube, just released by Bear Manor Media, also available from amazon.com etc etc etc. To learn about the history of vaudeville, consult No Applause, Just Throw Money: The Book That Made Vaudeville Famous, available at Amazon, Barnes and Noble, and wherever nutty books are sold.