Bob Hope in “A Global Affair” 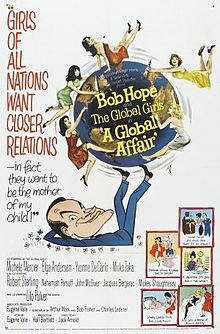 I never regret a single minute spent in the company of the Mad Marchioness. In fact, when we are apart I am so inconsolable that I must fill the moments as best I can with healing laughter. And thus I usually take the opportunity to watch stinkers when she’s out of the house. I often joke about this in social media, but the joke is never at the expense of the Marchioness. It’s always at the expense of the movie, which very few modern humans would ever care to spend time with. (Well, of course YOU would! You’re not a representative sample of humanity — you’re reading this blog!) At any rate, last night the entrée was the 1964 Bob Hope comedy A Global Affair.

In his prime Hope had been one of the cinema’s funniest comedians, but in A Global Affair that time has passed. Not that he had anything to be ashamed of. By this point in Hope’s career he was one of the richest and most powerful men in the country, a guy who had the ear of international leaders and probably flattered himself that he influenced world events. That’s impressive but it’s not too funny — and unfortunately he brings all of that baggage with him into this movie. 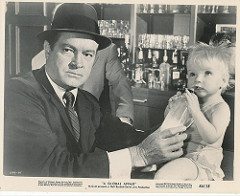 In A Global Affair Hope plays a mid-level United Nations functionary who is charged with the task of taking care of a foundling infant and then finding a home for it. The rub is that the baby was left by its mother on the premises of the United Nations — so who does it belong to? Why it’s a political football in diapers! The mix of high purpose and low-brow comedy is utterly disjointed and makes me finally begin to see the problem some people have with Chaplin’s The Great Dictator and Monsieur Verdoux, though I’ve always loved both films pretty much whole-heartedly. On the one hand, Hope is scarely playing a character in this movie. He’s just himself. He carries himself with great dignity and self-importance as a man of the world should do, and delivers lengthy speeches on the fate of mankind. On the other hand, the script smashes that together with unbelievable trite and goofy comedy crap pitched at about a Sherwood Schwartz level. Lost baby in a basket? Check. Chaotic room full of barking dogs? Check. Girl walks in while you’re in the bathtub? Check.

Which brings us to the sex farce element (a thing very much in vogue in the mid 60s). Every country in the world wants custody of the baby for propaganda purposes. To close the sale, they each send an incredibly sexy woman to climb into Hope’s bed to convince him. Implausibly, in the end he winds up with one of these girls, who’s about half his age (he’s roughly as sexy as the mature W.C. Fields at this stage of his career) AND the U.N. lets HIM keep the baby! Sure! That’s just how the world works!

I mean, who is this movie for? Actually I ask that question about every Bob Hope movie made after the mid 1950s. Because these films seem to serve a very narrow demographic – middle aged and elderly men. I’m certain that’s why Hope couldn’t get a green light for a picture after 1972 – there just weren’t enough grandfathers in the country to fill up the movie theatres. (I confess I find his cameo in 1979’s The Muppet Movie to be fairly magical though). Anyway, A Global Affair clearly tries to address the Old Guy Problem by teaming Hope up with Robert Sterling, who is kind of a poor man’s Gig Young–Bob Cummings-Robert Culp-Bob Crane, but much more irritating. He plays the swinging bachelor next door, a part not unlike that which Hope used to play himself, but now has to transfer onto someone else (believe me, if Hope could have cloned himself to play both roles, he would have).

Among the film’s jaw-dropping low points: in one scene, the two gents are diapering the baby and don’t have any talcum, so they use powdered sugar. And Hope quips? Yes, that’s right: “How this for sweet buns?” He says this while we’re literally looking at a picture of the baby’s ass. That one had me instinctively reaching for the phone to call the authorities. In another scene, Hope’s character addresses the entire United Nations General Assembly, and they’re trying to ascertain his qualifications for judging which country gets the baby. One of the diplomats asks, “What do you know about Turkey?” and Hope responds-? Yes, that’s right: “Well, the white meat is tender!”

And on that seasonal note, I bid you good afternoon.