Harry Hershfield: The Jewish Will Rogers 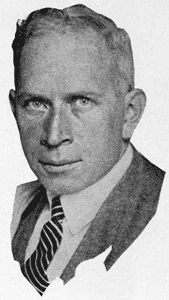 Iowa native Hershfield started out as a teenage cartoonist for Chicago newspapers, before moving to New York and working for the Hearst syndicate and other papers there. His strips included “If I’m Wrong, Sue Me!” and “Meyer the Buyer”. Very progressive!

From cartooning, Hershfield branched out into being a toastmaster and master of ceremonies. Many prominent cartoonists (e.g. Rube Goldberg, Winsor McCay) worked in big time vaudeville. Hershfield is known to have brought his comedy to the Palace Theatre, the biggest vaudeville house of all.

In the 40’s he worked in radio, on such shows as One Man’s Opinion, Abie the Agent, Stop Me If You’ve Heard This One and Can You Top This? In the early 50s, he was a frequent guest panelist on television as well.

For more on vaudeville, consult No Applause, Just Throw Money: The Book That Made Vaudeville Famous, available at Amazon, Barnes and Noble, and wherever nutty books are sold. For more on silent and slapstick film history don’t miss my new book Chain of Fools: Silent Comedy and Its Legacies from Nickelodeons to Youtube, just released by Bear Manor Media, also available from amazon.com etc etc