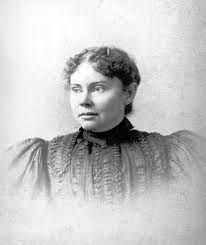 Well, you could have knocked me over with a feather. In honor of Nance O’Neil’s birthday and the Halloween season upon us, I thought I would do a little post about great screen adaptations of the Lizzie Borden story. And when I did a quick inventory I realized there weren’t any! (Great ones, that is, and very few of any sort).

One assumes there would be more, for all sorts of reasons, I suppose. Much like the Jack the Ripper tale, it has been absorbed into folk lore. Everyone knows the story, everyone knows the song. Everyone can picture the house and all the characters. But as I looked at it, I realized that we mostly know about these things from non-fiction treatments in the media: re-enactments on reality television, documentary films, stories on news magazine programs and the like. Mainstream dramatized screen adaptations are somewhat rare, and have mostly fallen short of the mark. Why?

“Too soon”? In a way, yes. Borden died in 1927 (pretty recent). Unlike the Ripper, we actually know who she was, if not precisely what she did. And, to be perfectly factual (how boring) she was acquitted which means that if she has/had living relatives it might be kind of hard to say or imply that she actually did murders. Still, where there’s a will, there’s a way. I know of just two major tellings. 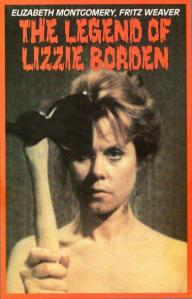 Until very recently the 1975 TV movie The Legend of Lizzie Borden starring Elizabeth Montgomery was  the most widely known. I actually saw this on TV when it originally aired! Montgomery was fresh off her long stint on Bewitched , and there’s a sort of logic to this casting. But Montgomery was in reality far too beautiful and refined to play this character. And as a tv movie, it’s pretty light on the chop-chop-chop, if you know what I mean. As I’ve written, in general I’m not a fan of mere killer stories — when set in the present. But somehow, if it has the patina and distance of history, if it is “Gothic” or Victorian, it’s got a green light. Then it’s “horror”. (For the same reason I am SO majorly looking forward to the upcoming adaptation of The Devil in the White City, about H.H. Holmes.).  The producers of this film were very smart in calling it “the LEGEND”, by the way. You can always say that you never claimed what you are telling is the truth if it’s just “The LEGEND of Lizzie Borden”. So, yeah, that pretty naked lady IS holding an ax. At any rate, this TV movie was OK; I’ll talk some more below about what I’d like to see someday. 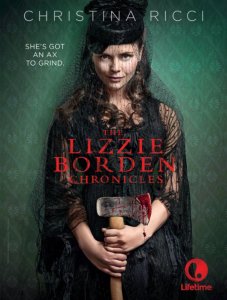 Christina Ricci, also far too beautiful to play Lizzie Borden. I mean, unmarried at 32, living with her parents in the 19th century?  And judging by photographs. This isn’t about lookism, it’s about the logic of storytelling. A knock-out’s getting married back then, probably even if only as a cover for lesbianism, if that was Lizzie’s true orientation, as some suspect. A plain, middle aged “papa’s girl” is simply more plausible storytelling. But Ricci can play the creepy affectless thing that worked so well for her as Wednesday Addams, and that’s a plus. So I was excited when her tv movie Lizzie Borden Took an Ax came out last year. And then was disappointed (my review is here). We also watched some of the new series The Lizzie Borden Chronicles, which takes even more liberties and liked it even less.

Besides these two, there were a handful of scattered adaptations of the story on television in the 1950s and 60s, mostly as installments on anthology shows like Alfred Hitchcock Presents, and there have been a few plays and musicals.

So….it looks to me like the field is wide open here for the right person to do something amazing.  With a good director, and the right casting, this is ripe to be an amazing horror film. Who would I want as Lizzie? Someone more like Shirley Stoler from The Honeymoon Killers (1969). Someone you can believe can get mad enough to swing an ax at someone, and then be psychotic enough to brazen out the inquiry afterwards. Kathy Bates, when she was younger? Yeah, Kathy Bates. Or, a comical goof version starring Melissa McCarthy? Anyway I sure know how I’d make MY Lizzie Borden movie! Investors, get in line!