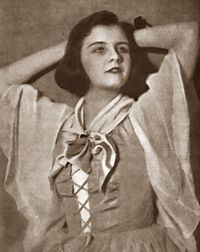 Today is the birthday of dancer and stage and screen actor Mary Hay (Mary Hay Caldwell, 1901-1957) .

An army brat, she was born at Fort Bliss, Texas. Her start in show business came about from studying and performing with the Denishawn Dancers in Los Angeles. As a result of this association, she was cast in the role of a French dancer in D.W. Griffith’s Hearts of the World (1918). On Griffth’s advice, she went east to get some stage experience, appearing in several Ziegfeld shows: the Nine O’Clock Frolic, the Ziegfeld Follies and Ziegfeld Girls of 1920. She then returned to Hollywood to appear in Griffith’s Eastward Ho (1919) and Way Down East (1920) alongside Richard Barthelmess, whom she married that year.

For the next decade the focus of her professional life was on Broadway. Among her successes were the Marilyn Miller vehicles Sally (1920-1922) and Sunny (1925-1926). She appeared in one last film with Barthelmess, New Toys in 1925. The two then separated, finally divorcing in 1927. Meantime she worked up a dance act with Clifton Webb, whom had also appeared in New Toys, and they performed in supper clubs throughout Europe and the U.S.

In 1929 she starred  in big time vaudeville (including the Palace) in the one act play The Valiant with Bert Lytell. Her last Broadway show was Greater Love, which opened and closed in March 1931. She spent most of the 1930s living in San Francisco acting in Little Theatre productions. In 1939 she married wealthy San Franciscan Richard Hastings and retired from show business.