The Day Alfalfa Was Cut Down 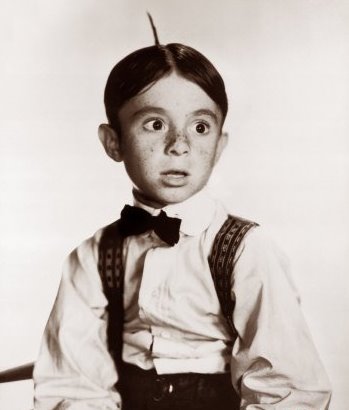 Carl “Alfalfa” Switzer (1927-1959) was one of the most instantly recognizable (and popular) members of the Hal Roach kiddie stars billed as Our Gang, later known as the Little Rascals. As a comic type, he was indelible — he truly had (and has, to this day) one of the best comic get-ups in American film history. Tall and thin, he was always dressed in clothes that were too small (you could see ample amounts of sock underneath his high-water pants), suspenders, bow tie, and above all, everything above the neck: freckles; wonderful eyes that could bug out, pop, and even cross; and that hair – – slicked down with goose grease within an inch of its life, severely parted in the middle, with a crazy cartoonish cowlick riding the back of his head like a tail. You just pictured his mother fussing, cuffing and combing him every morning. And then there was his voice, which was rural and Southern-sounding, always squeaky and cracking, and he would inevitably sing terrible versions of well known airs: “I’m the Barrrrber of Seville!”

This was an extremely funny kid, just a natural, and the stark, iconic clownishness of his costume and persona ranks up there with the greatest in American comedy: Charlie Chaplin, the Marx Brothers, Peewee Herman? Think about how often it has been imitated. Am I going too far? He’s easily the most memorable member of the long-lasting popular Our Gang series, at any rate.

How he came to be in it: he got lucky! He and his brother Harold were touring the Hal Roach commissary with their family one day as tourists, started fooling around, and were hired on the spot! This was in 1934. The following year they appeared in their first film, Beginner’s Luck. (Harold was known as “Slim” or “Deadpan”). Within months, Carl was one of the stars of the series. He remained with Our Gang through 1940.

Like most former child stars, he struggled in later years, but he did better than you might think. He certainly fared better than the long term “leader” of the bunch, George “Spanky” McFarland. Switzer appeared as a cast member (also as “Alfalfa”) in the Bowery Boys knock off series “The Gas House Kids” from 1946 through 1947. And like fellow Our Gang alum Ernie “Sunshine Sammy” Morrison, he was also a Bowery Boy, albeit in only one film, Dig That Uranium (1956). He was also a semi-regular on Roy Rogers’ tv show 1952-1955.

Since these were mostly bit parts and walk-ons, Switzer also worked as a dog breeder and trainer to help pay the bills. In early 1959 he got into a dispute about money with one of his clients. Switzer (who was wielding a knife himself in the confrontation) was shot and killed — over the sum of $50. 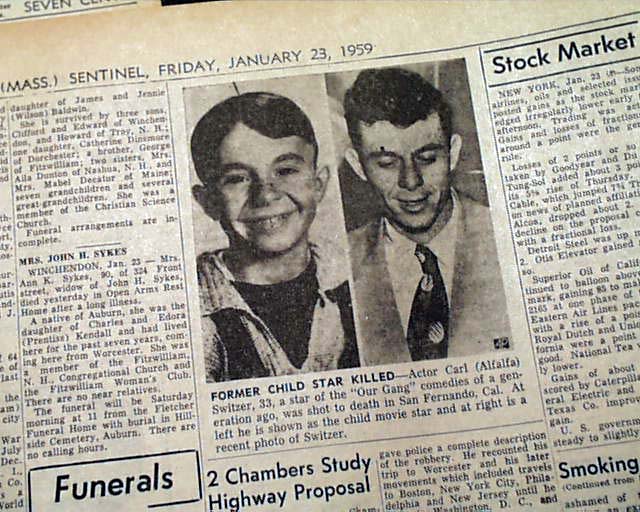