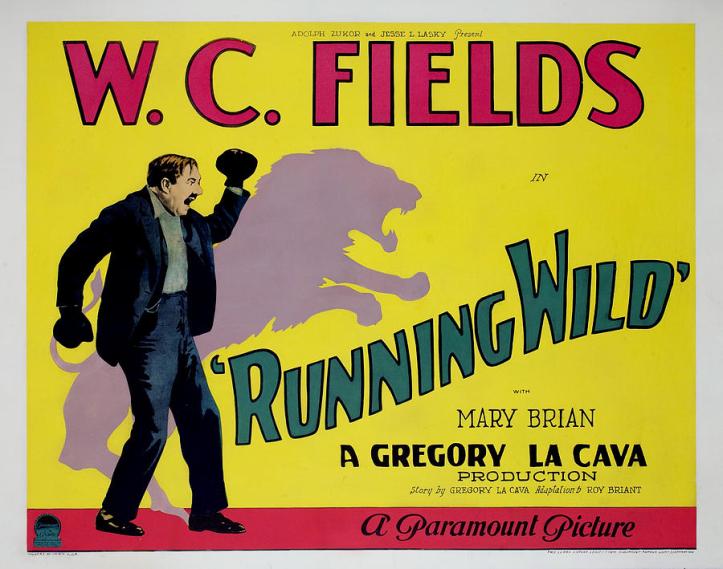 Today is the anniversary of the release date of the 1927 silent comedy feature Running Wild, starring W.C. Fields, directed and co-written by Gregory LaCava.

In the film, Fields plays an early version of one of his countless hen-pecked husbands, disrespected and bullied by his boss, co-workers, clients, wife, family and even his dog. In keeping with the Fields formula, only his daughter (Mary Brian) is good to him.

One day, while fleeing an irate store owner (he has just accidentally broken his window with a thrown horseshoe), he ducks into a door which turns out to lead onto the stage of a theatre — where a show is in progress. A hypnotist is giving a demonstration and he hypnotizes Fields to think he is a lion. Fields immediately knocks the hypnotist unconscious and is therefore permanently stuck in ferocious mode. He goes back and squares accounts hilariously (sometimes brutally) with everyone who had done him dirt throughout the picture.

I saw the film years ago at the Museum of Modern Art and the audience loved it. Audiences of Fields’ day did not. It is an odd one for Fields, probably his least characteristic surviving feature. Normally, his portrayals are more complex. While browbeaten, his husbands normally have brief moments of satisfaction, mumbled asides and little surreptitious acts of defiant sabotage. That is what MAKES his character. Here, La Cava allows him nothing. Similarly, most of the humor from the rampage comes from shock. It’s not clever in the Fieldsian way, just violent (more like early Mack Sennett).

The failure of this film sapped Paramount’s confidence that they could make a solo film star out of W.C. Fields. His remaining silent features would all co-star Chester Conklin. Fields liked working with Mary Brian, though, and later went to great lengths to get her cast in Man on the Flying Trapeze. And he and LaCava remained lifelong friends.

The film is currently available on Youtube; see it here.

For more on silent and slapstick comedy film history, including the silent work of W.C. Fields see my new book Chain of Fools: Silent Comedy and Its Legacies from Nickelodeons to Youtube, released by Bear Manor Media, also available from amazon.com etc etc etc