Poor chap! Ron Moody’s death today at age 91 will inevitably be overshadowed by Christopher Lee’s death at 93, so I want to do my bit at memorializing him.

Moody specialized in playing shifty, untrustworthy (but somehow lovable) weasels and scalawags. Inevitably most of the commentary today revolves around his definitive Fagin in the musical Oliver! (1960 West End, 1968 movie, 1984 Broadway). But I wanted to give a shout-out to some of his other notable performances:

One of his first roles was in the terrific 1963 Cold War satire The Mouse on the Moon, a sequel to The Mouse that Roared directed by Richard Lester. He played the prime minister role originated by Peter Sellers in the first film.

But I ESPECIALLY want to praise his part in one of my favorite comedies, certainly one of my favorite Mel Brooks comedies, 1970’s The Twelve Chairs. I place it only behind The Producers and Young Frankenstein in my ranking of Brooks’s films. I imagine no one else does — most people have never heard of it, and those who have seem unimpressed. But to me, it is full of virtues. It is a SMALL film, not as ambitious as The Producers and not yet in the spoof/burlesque mode he became famous for in his next film Blazing Saddles. The Twelve Chairs is a buddy comedy, of sorts, based on a 1928 novel by Ilf and Petrov.

Set in the young Soviet Union, it casts Moody as a former aristocrat who learns from his mother-in-law’s dying lips that she has hidden the family jewels in the titular dinner chairs. The race is on to find them, with Moody being joined by handsome young con man Frank Langella (in his first movie role), and corrupt priest Dom Deluise as the competition.

As you know from his Fagin, greed was an emotion Moody played well. And his parents were Eastern European — he did the accents and mannerisms with great expertise. Add to it Brooks’ patented direction, everything dialed up to eleven, pitched tight, tight, tight and you have lots of hilarious eye-bugging, yelling, whimpering and loss of composure. And also moments of pathos, another reason why this is a favorite Mel Brooks of mine. The Producers has such moments, too. These are “real” movies, as opposed to genre spoofs. At any rate, Moody is a “real” actor as well and he hits the notes of sympathy, despite the fact that his a character with many large faults. A tremendous comic performance from a great comic actor. 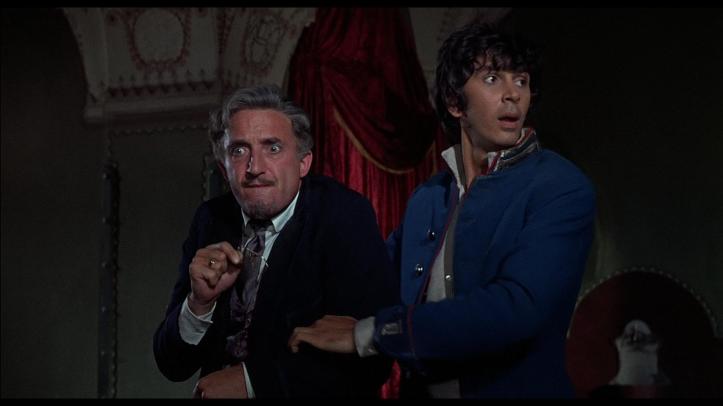