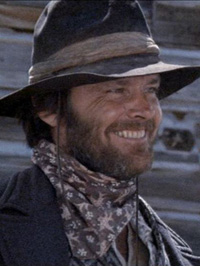 Today is the birthday of Jack Nicholson (b. 1937). Nicholson is not normally associated with the western genre, his career is pretty eclectic, but I do happen to have some notes in my trusty notebook, with thoughts about four western pictures he has appeared in. They all have their suitable weirdnesses and sundry points of interest. Warning: we always include spoilers! 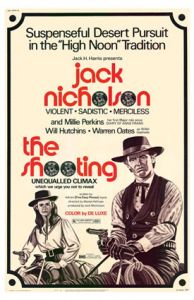 Directly after his early Roger Corman horror pictures The Raven and The Terror, Nicholson worked on several low-budget pictures with fellow Corman protege Monte Hellman (best known perhaps today for Two-Lane Blacktop). Two of these (The Shooting and Ride in the Whirlwind) were westerns. In The Shooting Warren Oates and Will Hutchins play two men hired by a woman (Millie Perkins, best known as Anne Frank in the titular bio-pic) to go cross country on a manhunt. They are then joined by a gunslinger, played by Nicholson. The four of them have an ordeal crossing the desert. Nicholson and Millie Perkins kill the other two and that’s pretty much the whole story. It’s an interesting revelation to watch a western made on such a low budget.  The only special feature (the closest thing to a production value) the Hellman films have are the locations. The casts are very small and there is very little by way of sets. But a story can be told with these simple elements. In this case we are nearly stripped down to a Samuel Beckett level of inputs. 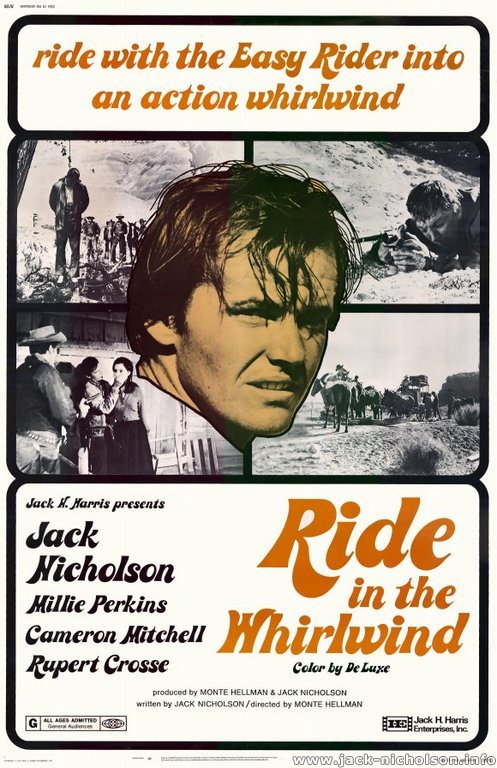 This one, also directed by Hellman, not only starred Nicholson, but was written and co-produced by him as well. Very low budget, but with a solid cast: Nicholson, Cameron Mitchell, Harry Dean Stanton and once again the lovely Millie Perkins.  In this one, three cowhands spend the night unwittingly enjoying the hospitality of a gang of stage coach robbers. Then a posse shows up and the three innocent heroes are pursued as part of the gang. They are chased for the rest of the movie. By the end, two of them die, one is still running. There’s little character development, and little character, and somehow it doesn’t add up to a story. Still it’s a conversation piece. 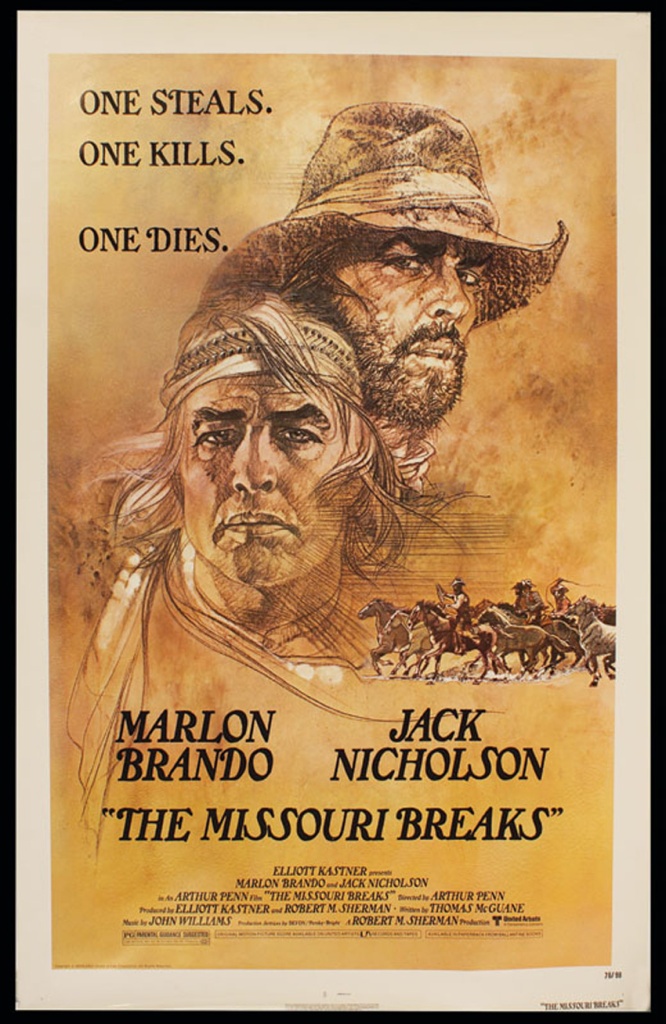 An amazing movie, directed by Arthur Penn (who had a previous western under his belt, Little Big Man). The Missouri Breaks pits a rancher and his seemingly insane “regulator” (Marlon Brando) against a gang of rustlers led by Nicholson. The rancher is a ruthless law and order man; he hangs rustlers summarily without trial. When he hangs one of Nicholson’s boys, the plot begins. The dialogue (by Thomas McGuane) is really good in this film — a cut above. Especially well written and directed is a scene early in the picture when Nicholson comes home from a trip and reunites with his buddies (who include Harry Dean Stanton, Randy Quaid and John Ryan) and learns the bad news. The scene feels rich and real and seems intended to pave the way for what happens in the end, as all Nichoson’s buddies are killed by Brando.

Brando’s regulator is a weird, comical character, at once funny and terrifying, kind of like the clown from Stephen King’s It. He wears perfume. Through most of the movie he has an Irish accent. In another scene, when he goes undercover to snare Quaid, he has a completely different accent.

The movie loses focus along the way, seems unsure what story it wants to tell. In order to better facilitate their rustling the gang buys a ranch on the bad rancher’s property for “relays”. Nicholson stays behind while the rest go to Canada to rustle horses from the Mounties. The film slows down considerably. Nicholson takes to farming, and liking it, and falls in love with the rancher’s daughter. This bogs the film down and it feels like another story, one that is not fully told. At any rate, Brando tracks down and kills (through fairly brutal means) the rest of the gang. Nicholson sneaks up on Brando while he is sleeping and slits his throat. He goes to kill the rancher and learns that he has had a stroke. Stroke or no stroke, the rancher starts shooting anyway, and Nicholson kills him. In the end, it seems like he and the daughter will get together. Great acting (esp. Brando in one of his most memorable roles), great dialogue and directing — up to a point, but the story needs work. Seems to me there’s two different movies jockeying for dominance here and neither gets fully told. 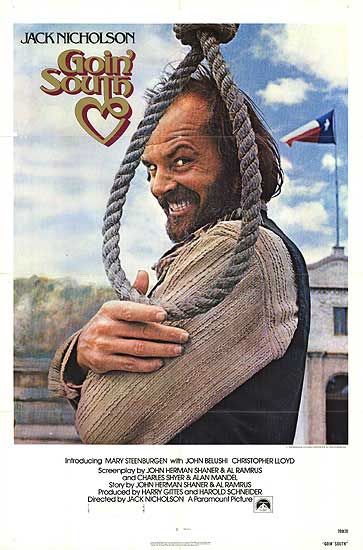 A very funny comedy western and a special treat for Nicholson fans, for he not only stars in this film but he directed it as well. Nicholson plays a guy who about to get hung but then is saved at the last minute by a local ordinance from the Civil War days that says a man can be freed if any eligible woman in the town wants to marry him. Mary Steenburger offers to do it, mostly so she can use him as slave labor to work the gold mine on her land. Other characters include Christopher Lloyd and John Belushi as deputies (Belushi as a Mexican — boy, how I miss him roles like this, offensive as it is). Danny Devito and some others play Nicholson’s old gang. (Clearly Nicholson had bonded with Lloyd and Devito on the set of the previous year’s triumph, One Flew Over the Cuckoo’s Nest). There are a couple of distasteful rape scenes played for comedy which really don’t make the grade today, but otherwise, it’s mighty enjoyable A buddy picture, with the prim virgin Steenburgen and the stinky, bearded roughneck Nicholson growing on one another until they are a bona fide couple. Ed Begley, Jr.’s in it too as a fellow “gallows groom”.