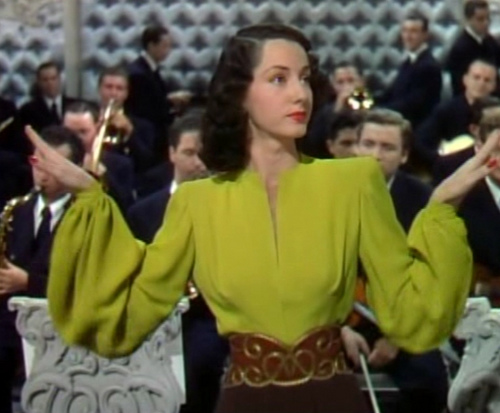 A tribute today to singer and character comedienne Virginia O’Brien (1919-2001). Though I am about 70 years too late, I will always be her advocate and champion — I see the greater things she might have gone on to do if people of vision had decided her fate. (As it happened, her fate wasn’t so bad — I just want to be able to see her in many more and greater movie roles).

Her blessing and her curse was a gimmick — an extreme deadpan way of delivering a wisecrack or a song that was hilarious and invariably stole the show. Critics dubbed her “Frozen Face”, “Miss Ice Glacier”, and “Miss deadpan”. Something about her shtick seemed to suit the swing era; it was hip and cool and urban and cutting…just a heartbeat ahead of the beatnik chicks who would follow in her footsteps a few years later. With her dark beauty, she seems a distant cousin and ancestor to the goth comedy of Vampira, Morticia, Lily Munster and Elvira, but without the shrouds and cobwebs (she was more of a ’40s clothes horse and fashion plate).

The lore is that in 1939 the L.A. native was in a musical comedy called “Meet the People” and her nerves were so great, her performance came out “deer in the headlights”. Rather than bombing, the audience thought it was an act and loved it. The fact that her uncle was director Lloyd Bacon provided an entree into the film industry. She was an uncredited extra in Eddie Cantor’s Forty Little Mothers (1940). But she stole the show in the Marx Brothers’ The Big Store (1941) — her number is really the only good thing about that movie. She got another scene stealing song in Ringside Maisie (1941), and then was cast in a succession of popular musicals, including Lady Be Good (1941), Panama Hattie (1942), Du Barry was a Lady (1943), Thousands Cheer (1943), Ziegfeld Follies (1945), The Harvey Girls (1946), and Til the Clouds Roll By (1946). She also had great roles in two non-musical Red Skelton comedies, both re-makes, The Show-Off (1946), and Merton of the Movies (1947). Then, unceremoniously, her studio (MGM) dropped her like a hot potato. Most of the remainder of her long career was spent in live performance, although she did appear in two more movies, both of them for some reason starring mules:  Francis in the Navy (1955) and Gus (1976).

So we come to my diatribe. Clearly there’s the taint of “flavor of the month” to O’Brien. Obviously the determination was made that she was a one-trick pony, a fad, and it had played out, so the studio sent her on her way. To me, doing so was short-sided and unjust. For two reasons. One, is that she had proven she had some other notes on her instrument. From the first, she showed onscreen that the deadpan thing was just an act. She’d often play scary and severe…but then she’d let down the mask and show that she was really warm and friendly and approachable. And in those last two Skelton movies she’d held her own. But also, a certain soul brother of her’s had proven that you could work such an act for decade after decade. I’ve long admired the acumen of whatever photographer took this photo: 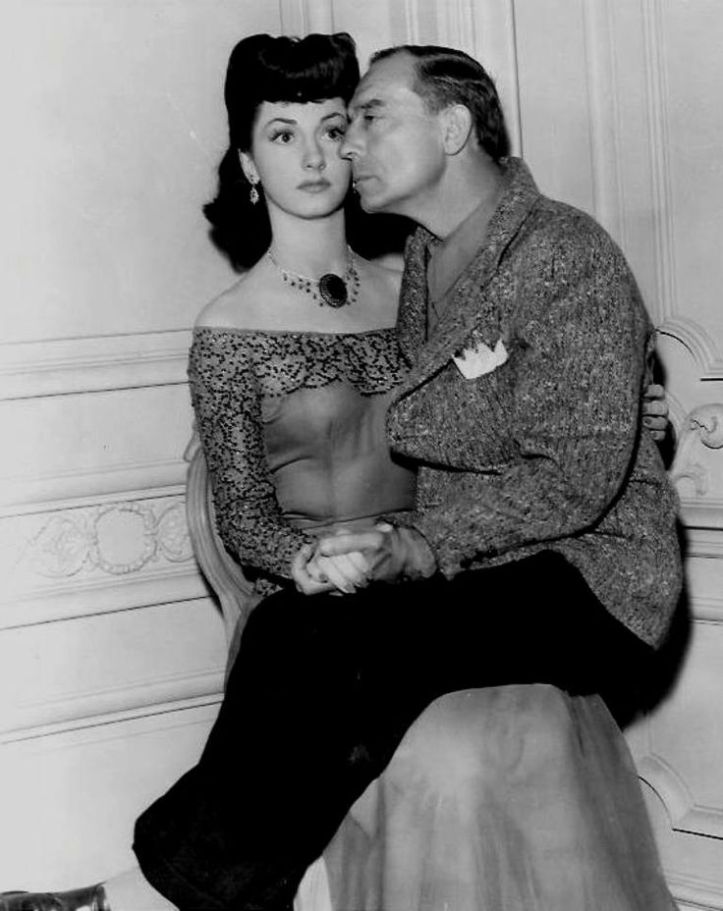 A smart producer would have cooked up a high concept comedy pairing of these two (hopefully with Buster in a father role rather than a love interest.)  Anyway, I can cast O’Brien in imaginary movies ’til the cows come home. As I can with a certain spiritual heir apparent to both her and Keaton, Steven Wright — I don’t know why he’s not an ensemble player in a zillion comedy movies. Oh yeah, I know why. The world is insufferably stupid.

Anyway, one of my favorite bloggers Psychotronic Paul has also written about the expressionless one. Here’s his take at Way Too Damn Lazy to Write a Blog.