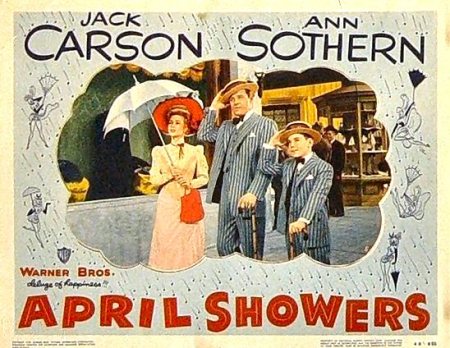 Looking for something vaguely Spring-like or Easterly this morning (without paying much attention), I watched the 1948 movie April Showers. Assuming, I guess, it was something like April in Paris, or An American in Paris, or maybe Easter Parade…or perhaps a Jolsony vehicle around the song “April Showers”.

Well, the song “April Showers” is definitely in the film, and so are a lot of the great Tin Pan Alley songs of the late 19th/ early 20th century century….because this is a movie all about vaudeville. April Showers is very similar to all of those bio-pic films we wrote about here and here, that hang a movie on an old song catalog. Except here, the characters are all fictional, and the film is a lot better for it. And furthermore the film was written by the great Joe Laurie, Jr. The “Homer of Vaudeville” and it is rich in small accurate touches that make this film closer to reality in many ways than most other films with a vaudeville setting.

Jack Carson and Ann Sothern play a struggling small time vaudeville couple based out of San Francisco. Cuddles Sakall plays the manager of the actor’s hotel whose bills they can’t pay. Things look up for them when they bring their 12 year old son (Robert Ellis) into the act. The kid is a prodigy; the parents have taught him  everything they know. The act clicks. They are sort of a cross between the Four Cohans and the Three Keatons. They get a big time booking at Proctor’s Fifth Avenue — and after a single performance are promptly closed by the Gerry Society (the NYC association of butt-inskys who prevented children from working in show business). They go back to San Francisco with their tails between their legs and Carson starts hitting the bottle (another Keaton echo). Then they hit on the idea of replacing Carson in the act with another performer, played by Robert Alda…who is not very nice. Tread water til the happy ending.

One of the treats of the film is young Master Ellis — he sings, dances, does impressions, acts well and has a winning personality. Poor guy. This was his first movie. I’m sure he and his family predicted great things. Unfortunately the remaining years of his career (another 12 or 13) were mostly spent in walk-on roles and small parts.

Not the most spectacular movie in the world, but full of small pleasures, and realer than many in this genre.

For more about the history of vaudeville, consult No Applause, Just Throw Money: The Book That Made Vaudeville Famous, available at Amazon, Barnes and Noble, and wherever nutty books are sold.