Since we made such noise about it here we thought we’d let you know the other shoe has dropped and last night we finally realized one of our life’s ambitions, which was to watch the 1973 musical adaptation of Lost Horizon.

And I’m here to tell ya, I won’t ever speak about it in the same way again. I went into it with my claws well-filed, ready to let loose with crude, derisive guffaws…and it turned out, there weren’t as many of them as I had anticipated. Many critics have called it one of the worst films in history — all I can say is those critics must not get out much.  This movie is too interesting, and has too many competent (and in some cases, excellent) elements to be so easily dismissed. It also has howlingly bad or simply problematic elements, too, no doubt. But that’s only part of the experience. It is a deeply flawed movie, which by my lights is a far cry from being one of the worst movies of all time.

You know the story, yes? A bunch of American and English travelers escape a coup in a fictitious Asian land only to have their plane crash in the Himalayas, where they are taken in to the mysterious, magical utopia known as Shangri-La, where there is no war or disease and every one lives to be hundreds of years old.

Right away we hit a major problem…one of the core problems of this film and it’s one the producers could have and should have addressed. Despite the fact that this film is updated to take place in 1973, the film-makers have not updated for major social changes that have taken place in the four decades since James Hilton wrote his novel. The novel and the original film were written during the height of British colonialism. It is definitely about “Us” (white Europeans) and “Them” (subject Asians). Further, in the original movie, several of the Asians were played by whites. That one is easy to fix. Hey, man, it’s 1973! We don’t DO Yellow-Face anymore! Hire Keye Luke! What’s the problem? But they didn’t. And so John Gielgud portrays one “Chang’. To his credit (he was a pretty liberal guy), he does it without face-paint or slanty eye make-up or a pidgin accent. He is just a man playing a man. But it’s a throwback, and stands out all the more egregiously because our five castaways (Peter Finch, Michael York, Sally Kellerman, George Kennedy and Bobby Van) are all white, vanilla, Caucasian and melanin-deprived. Even by 1973, producers were taking baby steps towards diversifying casts — a “token negro” here and there, at least. This cast, in this international situation, doesn’t even have, say, an Italian, or a Greek tycoon, or a Uruguayan soccer player or anything. (The latter example was not random. 6 months before this movie came out, an entire soccer team crash landed in the Andes and survived in the snow for weeks by resorting to cannibalism. It’s one of the contextual facts that might have made this movie seem more topical in its day. )

There are two other aspects that might have (and sort of do) make it more interesting to me in historical hindsight. One is that is all about a spiritual quest, and that was very much the incense that was in the air during the early 1970s. I imagine that might have been one of the motivations for reviving this story, although they’d have done a better job if they’d gone deeper (like, at all) into the Eastern perspective. The other illuminating aspect: the Vietnam war was a fact of life when this film was made. (I’m looking at you, Kevin Maher — this is another movie that’s secretly about Vietnam!) There are a couple of references to the war in the script. And again, there’s the latent (and even overt) colonialism. The cluelessness of the producers on that score permeates the movie. Uh, what are you white people even doing IN Asia?

So that’s a big hurdle, but truthfully, if unfortunate racial and cultural attitudes kept you from watching Hollywood movies, there would be almost NO Hollywood movies to watch. You watch them with your eyes open, you notice what you notice, and you pick out the wheat from the chaff. You do that or you jump in front of a freight train. I’m not about to jump in front of a freight train. 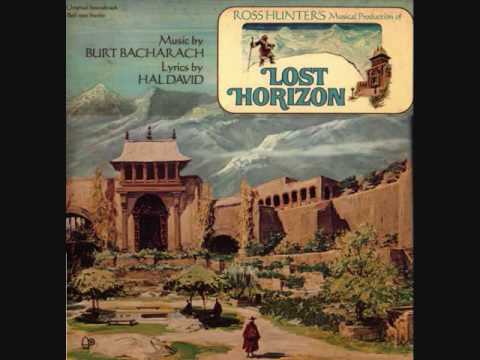 So what’s “bad”, aesthetically bad about the film? Well, it’s a musical. And the songs are by Burt Bacharach and Hal David. More than that. They are Burt Bacharach-Hal David songs, which is to say quite a different thing. By that I mean, despite the fact that we are in a hidden Asian paradise tucked away in the Himalayas, characters will stop and sing songs that sound JUST like the pop records of Dionne Warwick, the Carpenters and Herb Albert. There is no effort made to sound like the story or the setting. (How cool would it have been if George Harrison had done the music instead? VERY cool, that’s what). So picture it. The effect is HIGHLY absurd to hear these Bacharach-David songs in the context of the story we are watching, and to see these actors perform them (and dance to them). As Bette Midler famously joked “I never miss a Liv Ullman musical.” Picture, if you will, Sally Kellerman singing a silly Burt Bacharach song to George Kennedy in the context of this story. It is mighty amusing in all the wrong ways. The presence of Bobby Van amps the camp value up several more notches. (Half the derision this movie suffers is due to the presence of Van. If the cheesy comedian had been played by Red Buttons, we wouldn’t have quite so much contempt).

Add on top of that the songs don’t seem to move the action ahead, as is the goal in most modern musicals. I often am okay with that. It is the vaudeville way after all. That’s how it is in an Eddie Cantor movie, or an Elvis movie. You stop and do a song. The problem here is that this is a highly inert story to begin with. There’s nothing to stop.  It is about a whole bunch of people lying around and enjoying themselves. And every so often they sing a Burt Bacharach song that doesn’t serve any function except to stretch the movie out to two and a half hours. The songs are good (the tunes are anyway) — they just don’t fit into this story. They kind of invade its body like a bunch of tumors. (And Larry Kramer’s script is undeniably hackwork — especially the lines he writes for Bobby Van. )

Then, what’s GOOD about it? Many things: the art direction, the staging, most of the acting, and the way the film is shot. The choreography is by Hermes Pan! Those are major elements of any film. Here they’re not just competent, they’re highly professional, even inspired and frequently beautiful. In light of that, to simply write the whole shmear off as “bad” is a kind of gross injustice.

Much of the musical scenes reminded me of the films of Rodgers and Hammerstein musicals like The King and I, South Pacific and The Sound of Music. Award-winning director Charles Jarrott (award winning director of Anne of the Thousand Days and Mary, Queen of Scots) is clearly going for that sort of thing, but the absurdity of the songs cannot be (forgive me) transcended.

In summation, this is a highly interesting and flawed movie (as opposed to one of the worst ever), one I’m sure to watch several times more in future. It’s a good example of a visionary producer (Ross Hunter) throwing a bunch of promising elements into the pot…elements that just did not blend into a satisfactory whole.  Watch it and decide for yourself! Contrary to my previous erroneous commentary, the Lost Horizon musical is very much available on DVD and Blu-Ray.