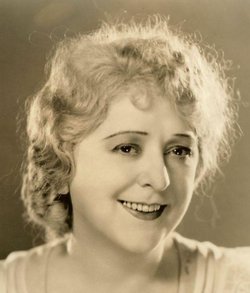 Her unusual name was adapted from that of her father, Joby “Happy” Howland, who’d gained fame as the Drummer Boy of Shiloh, the youngest enlistee in the Civil War (11 when he enrolled). She began her career as a model (she was one of the original Gibson Girls) and found her way to the Broadway stage by 1904. Her two dozen or so Broadway credits included parts in such shows as McIntyre and Heath’s The Ham Tree (1905), the first edition of The Passing Show (1912), Ruggles of Red Gap (1915-1916), and the Eddie Cantor vehicle Kid Boots (1923-1925). Though she was beautiful, her height (six feet tall) caused her normally to be cast as mothers and dames (Margaret Dumont roles) even when she was quite young.

In 1918, she made her first film Her Only Way, with Norma Talmadge. Only two more silent roles would follow; talkies would be much kinder to her. The silent screen’s bigger Jobyna would be Jobyna Ralston, leading lady for Harold Lloyd among others, whom, legend has it was named after Howland. Then, when sound came in, Ralston dropped out of films, and Howland became Hollywood’s reigning Jobyna. She was a frequent foil to Wheeler and Woolsey (The Cuckoos, Dixiana and Hook, Line and Sinker, all 1930); was in the all star screen adaptation of Kaufman and Hart’s Once in a Lifetime (1932) with Jack Oakie, Aline MacMahon, Zasu Pitts, Louise Fazenda, and Gregory Ratoff; The Cohens and Kellys in Trouble with Charlie Murray (1933), and the notorious pre-code bodice ripper The Story of Temple Drake (1933), written by William Faulkner. She died suddenly at age 56 of what is believed to have been a heart attack. Her brother Olin Howland was also a stage and screen actor.