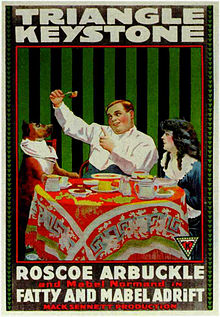 Today is the anniversary of the release date of the Keystone comedy Fatty and Mabel Adrift (1916), starring Roscoe “Fatty” Arbuckle and Mabel Normand, and directed by Arbuckle.

In the two years following Charlie Chaplin’s departure (1915-1916) Arbuckle-Normand team-ups were Mack Sennett’s most formidable box office combination. The pair appeared in dozens of films together, most frequently as a domestic couple. It’s especially exciting and instructive to watch the ones towards the end of this period, when the confidence that comes with prolonged stardom informs their performances, and when Arbuckle’s skills as a director blossom. Shortly after this, Arbuckle went on to his own starring series for his own company Comique, and Normand went on to her own starring series of features for Sam Goldwyn. These 1916 Fatty-Mabel shorts are kind of like Beatles records from 1968 or 1969. You’re experiencing artists who are about to be big solo stars, but still interacting in a format they’re beginning to outgrow, in this case the ensemble comedy short. The product of that tension can be very rich. 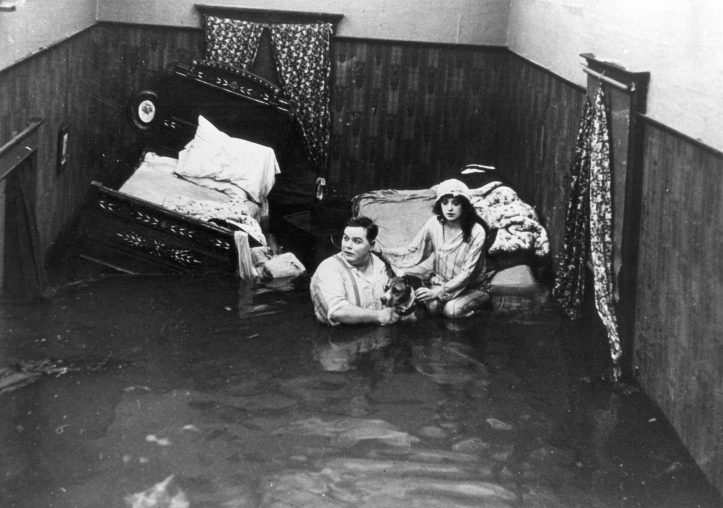 The plot of Fatty and Mabel Adrfit is very simple. Sweethearts Fatty and Mabel get married and take their honeymoon at a seaside cottage, along with another of Arbuckle’s frequent Keystone co-stars, Luke the Dog. Unfortunately, Fatty’s rival for Mabel’s hand (played as usual by Al St. John) is not through fighting. He and his several henchmen put the little house out to sea. Fatty and Mabel wake up the next day to find themselves far away from shore in a house full of water.

The climactic scenes of this comedy are spectacular, on a scale we usually associate with Larry Semon or with Arbuckle’s protege Buster Keaton. Sennett rarely shelled out for such big budget extravagances, but at this stage he was trying to keep both co-stars happy so they wouldn’t “pull a Chaplin” by leaving him. (As we said, they both soon did anyway).

How can Fatty and Mabel escape their dire predicament? Perhaps their heroic pooch will be of some help…

To learn more about comedy film history, including classic shorts like “Fatty and Mabel Adrift” please check out my book: Chain of Fools: Silent Comedy and Its Legacies from Nickelodeons to Youtube