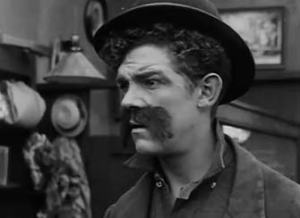 Austin’s movie career as an actor was confined almost entirely to the films of his fellow Karno alum, Charlie Chaplin. He came aboard Chaplin’s ensemble at the beginning of his Mutual period and immediately made himself indispensable. When you acclimate yourself to the Chaplin universe you quickly recognize him as a figure who appears in nearly every film starting around 1916, a tall, slim utility man who glides in and out of the stories like the well trained Karno cog that he is, to help set the pace and tone of the proceedings for the rest of the cast and keep the machine moving forward. His are not the showy, glory parts (the main foils) — those roles go to Eric Campbell and Henry Bergman. Nor is he the screwy visual gag, like a James T. Kelley. Austin is the in-betweener, the glue that holds the whole thing together — quiet, solid support for Chaplin’s comedy (I won’t say a thankless job, because he is appreciated, but if this were a live stage show, the others would get the louder applause). His parts are straight. He gets to take part in slapstick gags, but the focus goes to Chaplin, the “comedian”. Yet his Karno training has taught him the best way to “feed” the director/ star.

In the First National period (starting in 1917), the films started getting bigger and Austin’s parts relatively smaller: bit parts and walk-ons as opposed to integral parts of the ensemble, although Chaplin did provide employment for him as late as City Lights (1931), on which he was also assistant director. His one film as an actor outside the Chaplin universe was a relatively big deal for him — a proper starring role opposite Mary Pickford in Suds (1920).

From 1920 through 1926, Austin focused on directing. He directed two shorts for Mack Sennett in 1920, co-directed Jackie Coogan features in 1921 and 1922, then some Clyde Cook shorts in 1924, a Monty Banks feature in 1925, then a couple of shorts in 1926. In 1924 he began screenwriting as well, contributing to scripts for Hal Roach, and Universal. His last credit was for doing some writing on Laurel and Hardy’s Bonnie Scotland (1935).

To find out more about show business past and present, consult No Applause, Just Throw Money: The Book That Made Vaudeville Famous, available at Amazon, Barnes and Noble, and wherever nutty books are sold.