The Night The Bridge Fell Down

Thank God for the Mad Marchioness, who noticed recently that we have access to the Warner Archive through some thingamajig on what used to be called our television. And the Warner Archive turns out to be a fragrant meadow strewn with the finest, choicest trash, all ours for the picking.

Last night we chose wisely and we chose well. I consider myself something of a connoisseur of the work of big budget disaster movie producer Irwin Allen. As a child I was addicted to his productions beginning with the one that started it all The Poseidon Adventure (1972), the first movie I ever saw in a cinema, and still an important film for me. Amazingly, lightning struck twice with The Towering Inferno (1974), which follows the formula of its predecessor to a tee and far exceeds it in hokum (and everything else, including running time) but at least the movie is still full of “A” list stars. As the 70s wore on, though, the law of diminishing returns came into play, the disasters becoming ever more contrived and the casts dwindling in prestige (rest assured we will write about them ALL here. I was amassing material for a book, but the hell with it). At any rate, the ridiculousness grew apace, until we reach what we saw last night.

I was shocked never to have seen or even heard of the tv movie in question before, but I’ve just discovered why. Though produced in 1979, The Night the Bridge Fell Down didn’t air until 1983. And guess what night it aired? At the very same time as the last episode of M*A*S*H. The entire human race watched the last episode of M*A*S*H, myself included, although I’m still debating whether I’ll condescend to call myself a member of the human race. At any rate, it would only be natural for executives at other networks to schedule something for this slot which they wanted to bury. And this movie fits that description. 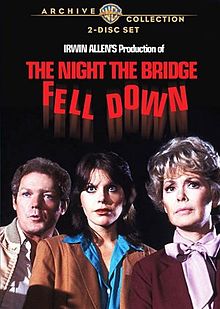 The all-star cast for this extravaganza consists of James MacArthur (Danno from Hawaii Five-O), Eve Plumb (Jan Brady), Gregory Sierra (Chano from Barney Miller) Desi Arnaz, Jr., Barbara Rush, Char Fontane (daughter of nightclub singer Tony Fontane), familiar character actors Richard Gilliland, Ted Gehring and Philip Baker Hall, and, most astoundingly, Irwin Allen repeat offender Leslie Nielsen. We were particularly nonplussed about the presence of Nielsen given that he had starred in Airplane, which pretty much blows the lid off the entire genre, three years earlier. How could Allen ever think anyone would take Nielsen seriously in a disaster movie at that late date? Was it just pure stubbornness? But, there again, we have the answer. As we saw, this movie was actually made before Airplane. It only ever saw the light of day in 1983, I’m assuming, out of desperation on somebody’s part.

Now, this movie kept us howling on two totally divergent scores. On the one hand, we were uncanny in our ability to predict so many lines and plot developments just before they happened; the beauty of such formulaic producing is that it makes psychics of us all. (“I’ll be there as soon as I can. I’ll just drive there over the bridge.“) BUT! Never underestimate the powers of this movie to confound all precedent. I think ultimately it has to be the most implausible movie, presented with a straight face, that I have ever seen. I am fully confident in saying that the likelihood of the events of this film happening anywhere in this galaxy is ZERO. And, isn’t that just what we’re frightened of, Mr. Allen —  events that would never happen?

As in all disaster movies, we first meet our gaggle of stars as they go about their ordinary daily business: oh, robbing banks, embezzling stolen bonds, breaking up with your fiance to become a nun. Only house painter Gregory Sierra (yes, they made the only ethnic person in the movie a house painter)  just seems to be driving across a bridge like a normal person when the disaster happens. Everyone else is driving across the bridge on the most harrowing mission of their lives, making the collapse of the bridge seem at most an inconvenience.

Did we mention there was a collapsing bridge? James MacArthur (the son of Helen Hayes and writer Charles MacArthur – – he inherited all his acting talent from his father) is, it seems, both a civil engineer and a seismologist. He warns his superior (Hall) about a looming disaster, but will Hall listen? No! Too much inconvenience to the drivers of this (unnamed) city! So guess what happens? All of the main characters, most of whom know each other and have been interacting throughout the story, all driving separate cars, coincidentally all get in the same car accident together at the peak of the bridge. No one gets hurt. Then, immediately thereafter, there is an EARTHQUAKE, and both sides of the bridge fall down, trapping all those people, conveniently stopped there at the center of the bridge because of the car accident. And there were apparently no cars on the parts of the bridge that fell down (nearly the entire span of the bridge in both directions).

But that’s not enough. Because Desi Arnaz Jr. is a bank robber and he has a gun. Remember, of the half dozen or so people trapped here, one of them has just robbed a bank, and two others have just stolen a large sum of money from their company. This bridge is a magnet for every fleeing criminal in this (unnamed) town! What’s more, the two conspiring embezzlers (Neilsen and Rush), were riding in entirely separate vehicles — they just happen to be in the same place at the same time!  (The 53 year old Nielsen’s errand was to bring his sick infant to the hospital, a development that is seriously cramping his style). Meanwhile, pursuing bank robber Arnaz is police officer Gilliland, and it’s a good thing, too. Because when he gets shot by Arnaz, his former fiance Eve Plumb just happens to be on the bridge too to take care of him as he bleeds.

Arnaz periodically tries to climb down the bridge on his own, gets discouraged, and comes back up. This happens four times. So many times, that towards the end when he comes back and starts waving his gun around again, the other victims barely notice him anymore. Anyway, they’re too busy having melodramatic flashbacks using that hokey Gilligan’s Island wavey image technique to pay attention.

Then, the authorities rescue everyone with ropes — in real time. The part of the movie that should take a few minutes, thus takes a century, as we watch the characters carry ropes, tie ropes, tighten ropes, climb ropes. A couple of characters are thrown to their deaths in the (unnamed) bay as the bridge disintegrates. Upon which, the remaining four characters climb down the bridge — in real time. Seems to take about four hours. And, if they could do that, why didn’t they just do that before??? Because then we wouldn’t have a movie, that’s why!