Buster Keaton in “The Navigator” 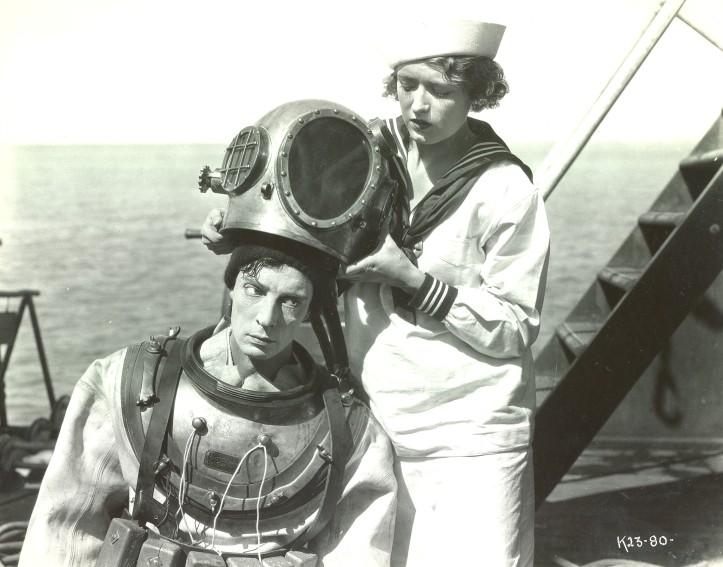 October 13 is the anniversary of the release date of Buster Keaton’s 1924 classic The Navigator.

This film is often ranked with The Gold Rush, City Lights and Keaton’s own The General as one of the greatest of silent comedies. Having heard that the S.S. Buford was slated to be scrapped, Keaton and his production team resolved to build a film around it. Keaton plays a callow young rich boy who, along with his girlfriend (Kathryn McGuire) is stranded on a drifting ghost ship in the middle of the ocean.

The film was Keaton’s biggest box office success and considered by many to be a cinematic masterpiece. As to the latter, it’s not hard to see what critics read into it. A ship at sea is a metaphor. To be alone on a ship at sea is an existential metaphor. For two useless rich people to be alone and helpless on a drifting ship is a political metaphor. But knowledge of such things generally does more harm at the box office than good. Keaton’s drifting ship gets into a surprising amount of trouble during the films 59 minutes. That’s what captures the allegiance of audiences.

The film was co-directed by Donald Crisp, best known today as an actor in films like Wuthering Heights and How Green was My Valley.

For more on silent and slapstick film history see my new book Chain of Fools: Silent Comedy and Its Legacies from Nickelodeons to Youtube, just released by Bear Manor Media, also available from amazon.com etc etc etc. For more on show biz history, consult No Applause, Just Throw Money: The Book That Made Vaudeville Famous, available at Amazon, Barnes and Noble, and wherever nutty books are sold.