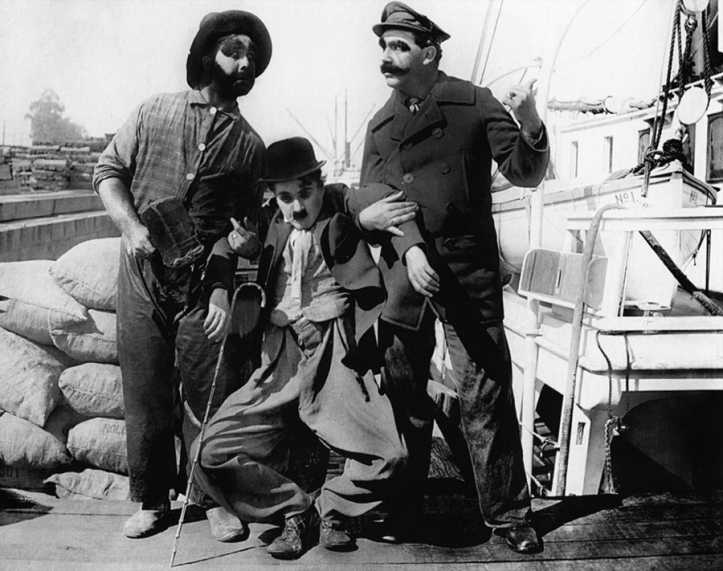 Today is the anniversary of the release date of the Charlie Chaplin comedy Shanghaied (1915).

In this funny Esssanay comedy, Charlie plays a poor shlub who loves the daughter (Edna Purviance) of a shipowner (Wesley Ruggles). He is hired to help a ship’s mate shanghai sailors for a voyage.  His job is to hide in a barrel and strike his victims on the head with a mallet when the other guy entices them with the promise of a drink of liquor. After several guys are thrown on board the captain and his accomplice turn the tables on Charlie and clonk him as well. The men wake up some time later and and are put to work.

One obvious technical flaw in the film that audiences of 1915 probably didn’t mind so much: scenes that ought to be taking place out at sea are obviously shot in a busy, populated harbor, probably in a boat that’s still docked. At any rate we get to see in embryo form business that Chaplin will resurrect later, such as the “rocking boat” effect he would revive for The Immigrant. Lots of slapstick stuff follows, involving the serving and eating of dinner, and moving cargo (and, accidentally, men) with grappling hooks. The film takes a turn for the excellent when we get a plot twist: Edna has stowed away in board, dressed as a man. This puts her in danger. Her father comes to a Griffith-esque rescue in a speedboat. He is about to remove her from the clutches of Charlie when…

To learn more about comedy film history please check out my new book: Chain of Fools: Silent Comedy and Its Legacies from Nickelodeons to Youtube, just released by Bear Manor Media, also available from amazon.com etc etc etc. To learn about the history of vaudeville, consult No Applause, Just Throw Money: The Book That Made Vaudeville Famous, available at Amazon, Barnes and Noble, and wherever nutty books are sold.