Charlie Chaplin in “The Idle Class” 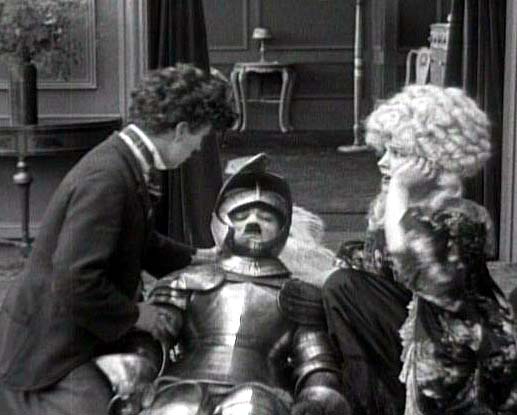 Today is the anniversary of the release date one of Charlie Chaplin’s last comedy shorts The Idle Class (1921).

Though a straight up slapstick comedy, The Idle Class is also one of the more eloquent films regarding Chaplin’s psychology. In it, he plays two versions of the Little Fellow: a tramp who arrives at a wealthy summer resort on the undercarriage of a train, and a drunken millionaire who happens to look just like him. The wealthy man’s booze problem is driving his wife (Edna Purviance) away. By coincidence, the Tramp has seen Edna from a distance and fallen in love with her. When they meet at a costume party (he has run in off the street fleeing a policeman) he is sweet to her, and she confuses him by being affectionate in return. When the real husband shows up, pandemonium ensues, until the truth sorts itself out, the husband is restored to his rightful place, and the Tramp is on his way back down the road.

This theme of doubling is hardly an original one with Chaplin. It is as old as Menander, was a favorite tactic of Shakespeare’s, and had a notable American antecedent in Mark Twain’s The Prince and the Pauper (1881). Larry Semon had used it in Romans and Rascals (1918) and Harold Lloyd in His Royal Slyness (1920). And it is a recurring motif in Chaplin: we find it in A Night in the Show and The Floorwalker and he would exhume it again The Great Dictator. Furthermore he did several related films in which the Little Fellow masquerades as an aristocrat: Caught in a Cabaret, A Jitney Elopement, and The Count. I find the fact that he keeps returning to this theme psychologically instructive. How does one deal with having once been among the poorest of the earth, and now among the richest and most powerful? Just how can one be BOTH people? How does one not on occasion feel like an imposter? He had begun to deal with his real identity in The Kid. It seems to me he is also dealing with it here on some level, even if it is just a silly comedy. It’s beneath the surface.

Thankfully, some might say, Chaplin refuses to make it too heavy. At the one moment in the film when it looks as though he might “go there”, he diverts it beautifully at the last second. Millionaire Charlie, just informed by a note that his wife has left him, seems to be heaving great sobs with his back to us. But when he turns around we see that he is just mixing himself a drink in a cocktail shaker (which is doubly amusing because his wife has also instructed him to quit drinking). Similarly, at another potential opportunity for sentiment in the film, when Mack Swain as Edna’s father comes out to apologize to the Tramp for tossing him out, Charlie responds by giving Swain an old fashioned Sennett-era kick in the tuchus before taking his leave.

To learn more about comedy film history, including Charlie Chaplin classics like “The Idle Class” please check out my new book: Chain of Fools: Silent Comedy and Its Legacies from Nickelodeons to Youtube