On The Many Faces (and Voices) of Howard Morris 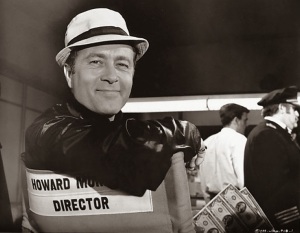 Today is the birthday of the once ubiquitous comedy professional Howard Morris (1919-2005).

I find it a little crazy (and surely incorrect) that his Wikipedia entry and his official page both give as Morris’s biggest claim to fame his recurring role as the minor character Ernest T. Bass on The Andy Griffith Show. When SURELY he cast a much larger shadow as one of the key cast members of all of Sid Caesar’s comedy variety shows:  The Admiral Broadway Revue, Your Show of Shows and Caesar’s Hour. I mean, come on! It’s ironic: nowadays, there’s a habit of immortalizing Caesar’s legendary writing staff (Carl Reiner, Mel Brooks, Woody Allen, Neil (and Danny) Simon, Selma Diamond, Larry Gelbart, Mel Tolkin) but Morris, who ALSO went on to do bigger things (chiefly as a director) often gets left out, even though to the television audiences of the 50s and early 60s he would have been much better known than those writers (except Reiner), because he was actually on camera.

Morris was to play bit roles throughout his career, but never more than that. Though a good looking man in repose, in action he was excessive. He had what I call the “Bert Lahr problem”. As a performer he could ONLY be extremely broad. His eyes would bug out and light up, and his mouth was perpetually open and making faces. It’s really too much to look at. It works OK on TV in small doses, but in the movies it can be a bit overwhelming. But he did have some notable turns. He plays Kelp’s father in Jerry Lewis’s The Nutty Professor (1963), for example, and Mr. Professor Lilolman in Mel Brooks’ High Anxiety (1978), among others.

But with his scratchy voice, and his facility with character and accents, he was a shoe-in for voice-overs. Just as with Paul Winchell, my first exposure to the comedy of Howard Morris was without a doubt his cartoon work: he was part of the ensembles of The Flintstones and The Jetsons, he played the title character in Atom Ant, and above all he did the voice of Jughead in the various animated iterations of The Archies. Not to mention that voice of Mayor McCheese in the McDonald’s commercials!

And from the 1960s through the 1980s, he directed scores of tv sit-com episodes (including the pilot of Get Smart) as well as films: the all-star heist comedy Who’s Minding the Mint? (1967), the Doris Day vehicle  With Six You Get Egg Roll (1968) and the original version of Woody Allen’s Don’t Drink the Water (1969).