Fredric March and Veronica Lake in “I Married a Witch” 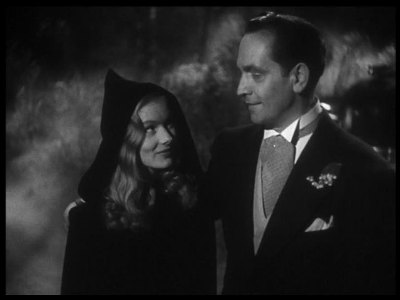 Today a tribute to Fredric March. Rather than crow about his dozens of well-known and award winning roles today (including one of my personal favorites since childhood, the seminal Dr. Jekyll and Mr. Hyde), I thought I would give a shout out to a picture I feel has been unjustly neglected, and one that is relevant to the journey that led to Chain of Fools. As I’ll discuss in more length in an upcoming post René Clair has become a favorite director of mine: the mixture in his work of comedy, fantasy and aesthetic beauty appeal to me particularly. I Married a Witch (1942) is a screwball comedy made by Clair during his brief Hollywood period, when he was in voluntary exile from the Nazi-affiliated French State.

Many regard the film as a likely inspiration for the tv sit com Bewitched. Veronica Lake plays a witch whose soul has been trapped since the Salem witch trials in the roots of a tree, along with that of her rascally father (Cecil Kellaway). In the present day (1942), lightning splits the tree in two, freeing their spirits to wreak havoc. In particular, Lake wants revenge on the descendant of the man who condemned them to the stake (March). He is a politician running for office; the irresistible Robert Benchley plays his friend and advisor, making full use of his native Massachusetts accent. Lake seduces March through a lengthy process whereby she gets him to rescue her from a burning building. By the end, she has stolen him from his fiance, and they are married. The hitch of course is that she inevitably falls in love with him herself, and it is no longer about revenge, but chemistry.

NOW: I’ll confess, I expected a movie that features Veronica Lake as an unearthly seductress to be a good deal steamier, and the publicity photos for the film seemed to promise as much. But it never delivers anything, for example, quite like this image, and I suppose we shouldn’t be surprised, this still being the land of the Puritans in the mid 20th century: 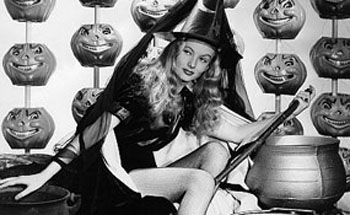 But there are plenty of laughs and magical moments, helped along no doubt by the fact that Preston Sturges was one of the producers, and Robert Pirosh (A Night at the Opera and A Day at the Races) and Marc Connelly (numerous collaborations with George S. Kaufman) were among the screenwriters. And of course, Clair directed.

As for the birthday boy? March was a great dramatic actor but comedy really wasn’t his bailiwick. Someone like Joel McCrea or Cary Grant would have fared better. But still this movie promises to be a new Halloween classic around the house of S.D.