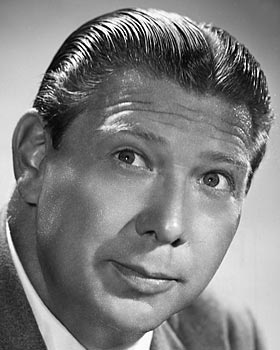 Today is the birthday of Harry Von Zell (1906-1981). Today he is best remembered for playing the neighbor and on-air announcer in the highly self-reflexive tv version of the George Burns and Gracie Allen Show. Here is an episode with a special Von Zellian emphasis:

Prior to this, Von Zell had been a CBS radio staff announcer for 20 years, working with the likes of Fred Allen, Eddie Cantor, Ed Wynn, Phil Baker, and Joan Davis. Here he is in a bit on the Fred Allen Show:

He’d also had his own radio program The Smiths of Hollywood, co-starring Arthur Treacher, and his own series of Columbia comedy shorts (1946-1950). Here he is in one of those, Meet Mr. Mischief:

In later years, the multi-talented Von Zell wrote several episodes of Wagon Train and acted on that show as well as McHale’s Navy, The Tall Man, Bachelor Father and Perry Mason.