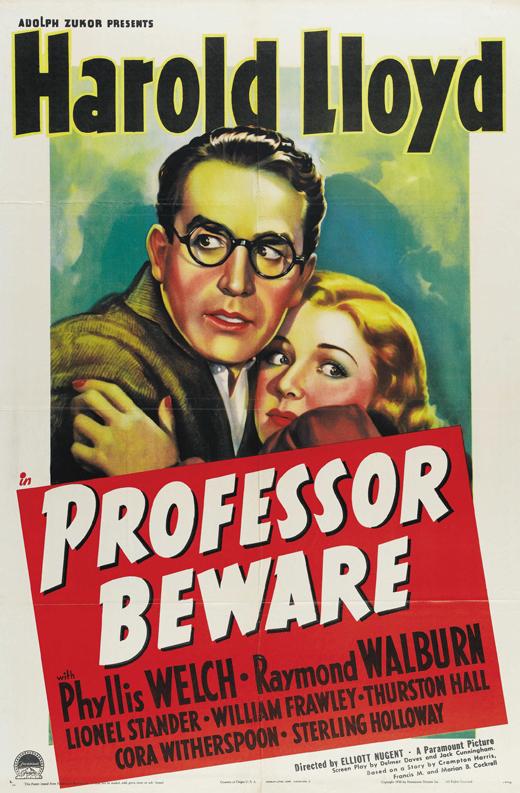 Today is the anniversary of the release date of the Harold Lloyd comedy Professor Beware (1938).

Much like the Marx Brothers, Harold Lloyd had several “last films”. His last starring film ever was The Sin of Harold Diddlebock a.k.a. Mad Wednesday (1947). His last starring vehicle produced by his own independent production company was The Milky Way (1936). Professor Beware was the last feature of his original 30+ year career. After this, he retired, returning only to do that one last picture at the request of Preston Sturges.

This was a film I’d wanted to see for 30 years and finally got my hands on a few months ago, through the kind offices of a friend. The lore was that it was bad, it didn’t do well at the box office and it convinced Lloyd he should throw in the towel as a screen actor. But it was not as bad as I expected it to be — by far.

It’s essentially a road movie/ buddy picture/ romantic/ screwball comedy with MUMMY MOVIE overtones. Lloyd is a professor who gets into snowballing trouble with the law. He has translated nine ancient plates and seeks the missing tenth one and wants to go to Egypt to do so. He hires some actors to perform an interpretation of the hieroglyphics but things get out of hand when he gives his clothes to one of the actors (William Frawley), gets arrested, then blows town before his hearing so he can make his trip to Egypt. (assisted by his landlady Clara Blandick). Meanwhile the actress who got him in the trouble (Phyllis Welch) follows him and gets misidentified as an escaped lunatic. Along the way they meet Sterling Holloway and his bride, and a couple of traveling con men played by Lionel Stander and Raymond Walburn. 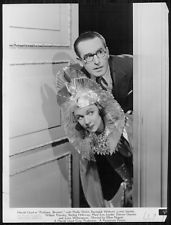 In the end as in It Happened One Night (which this movie much resembles), her father turns out to be a powerful millionaire. In New Jersey the couple is forced to get married to avoid a morals charge. This is ironic, because she has been in love with him, but he has been running away from her because he thinks they are reliving the doomed lives of the couple in the translated tablets (they also look just like their statues). In the end, the rich father tries to skirt the daughter away but Harold belatedly realizes he loves her too and in a spectacular finale uses all sorts of Lloyd level tactics to get on the yacht including commandeering an entire fire company, and pissing off a whole bunch of guys to chase him (very old school Lloyd). It is an awesome climax but a bit too little too late. Lloyd’s performance is off somehow. There ought to be some some sexual chemistry throughout the picture but there really is zero until the end. It takes the zing out of the whole experience.  What’s a romantic comedy without spark? The film was directed by Elliott Nugent, a former leading man himself who scored his biggest success directing Bob Hope comedies.

This was leading lady Phyllis Welch’s one and only screen credit, following some Broadway and radio success. Lloyd’s contract with her had stipulated she not get married. And what did she do? She went and got married! The priorities of some people!

For more on silent and slapstick comedy including the great Harold Lloyd, don’t my book: Chain of Fools: Silent Comedy and Its Legacies from Nickelodeons to Youtube, just released by Bear Manor Media, also available from amazon.com etc etc etc