We’re All Mad Here: The Marx Brothers in Context

Adapted from a talk given at the New York Public Library on May 29, 2014 and published in the May 2014 edition of Zelda.

This May marked the 100th anniversary of Julius, Leonard, Adolphe and Milton Marx adopting the handles Groucho, Chico, Harpo and Gummo. That’s over a century of the Marx Brothers. Quite a benchmark. While it’s tempting to think so, the world’s most popular comedy team didn’t emerge in a vacuum nor were they one of a kind. Groucho’s brand of verbal nonsense humor, Harpo’s kind of pantomime, and Chico’s dialect comedy were all highly popular, familiar specialties in their day. What made the Marx Brothers original was that they packed it all into the same explosive, anarchistic act. And they were so funny, of course.

But who were their precursors? 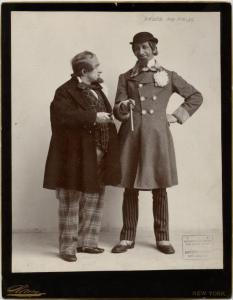 The mother of all vaudeville comedy teams was Weber and Fields. Joe Weber and Lew Fields were Polish-Jewish immigrants who grew up in New York in the 1860s and 70s, and were heavily influenced by two prevailing entertainment modes at the time, blackface minstrelsy** and the Irish-dominated variety shows that took place in concert saloons.

Obligatory Disclaimer: It is the official position of this blog that Caucasians-in-Blackface is NEVER okay. It was bad then, and it’s bad now. We occasionally show images depicting the practice, or refer to it in our writing, because it is necessary to tell the story of American show business, which like the history of humanity, is a mix of good and bad.

Sadly, nearly every American performer put on burnt cork in those days. There was widespread social acceptance of all kinds of ethnic caricature and lampoon, most extreme in the case of African Americans, but also pretty harsh with respect to the Irish, “Hebrews”, Italians, and Germans (then just as numerous as the other groups). Yet the form American comedy in vaudeville was to take also came from the minstrel show. All two man comedy acts draw from the straight-man/ comic dichotomy between the minstrel show’s master of ceremonies “Mr. Interlocutor” and his two end men “Mr. Tambo” and “Mr. Bones”. Minstrel shows were full of jokes and crosstalk and puns and malaprops that were influential on vaudeville. Almost any exchange between Groucho and Chico can trace its roots to this.

In saloons, variety entertainments drew heavily from the “oleo” or variety section of minstrel shows, but had their own flavor, mixing blackface performance with Irish stereotype comedy, knockabout slapstick, sentimental ballad singing, and the dancing of clogs and jigs.

Weber and Fields absorbed all these influences, performing blackface, Irish and German (colloquially called “Dutch”) characters for years. By the mid 1880s, they found their specialty, creating the act that made them rich, famous and incalculably influential: Dutch characters named Mike and Meyer. The act focused on slapstick and dialect humor, full of malapropisms and punning misunderstandings. By the 1890s they had become such a hit with their “Teutonic Eccentricities” that they toured their own full length vaudeville productions throughout the country. By 1896, they had their own Broadway theatre, devoted entirely to their own starring vehicles. In 1904, at a point when they’d been the most popular comedy team in the nation for 20 years, they broke up. Both continued on as important Broadway producers; they occasionally patched up reunited for special occasions.

Weber and Fields were the first vaudeville comedy team to have national, industry-wide influence. At the same time, another phenomenon was brewing in vaudeville: the popularity of male quartets. Some specialized in harmony singing; today we call them “barbershop quartets”. Others were more like sketch comedy troupes and were called “comedy fours”. These teams would sing but also did comedy characters, e.g. “Dutch”, “Hebe”, “sissy”, or “tramp”. There were scores of quartets and comedy fours in vaudeville’s heyday.

Among the most notable of these was the Avon Comedy Four. Its key members, Joe Smith and Charlie Dale met as teenagers in the 1890s when they had a bicycle accident. Their ensuing argument was thought by bystanders to be “as funny as Weber and Fields” and so they started an act. Circa 1900-1920 they anchored the Avon Comedy Four, each member switching off on the usual stock characters. By the early 1920s Smith and Dale broke off as a duo, becoming one of later vaudeville’s premier headlining comedy teams. They remain well known today as the inspiration for Neil Simon’s The Sunshine Boys.

Also important was the Manhattan Comedy Four (1895-1900). The lynchpin of this team was a man named Al Shean, who was the Marx Brothers uncle and their inspiration for going into show business. Shean (who wrote many of the team’s sketches) specialized in a Dutch characterization, becoming most famous as half of one of vaudeville’s most popular comedy teams, Gallagher and Shean.

But along the way, he had an interesting side project called the Marx Brothers.

At around age 15, inspired by his Uncle Al, Groucho went into vaudeville as a juvenile singer in a succession of musical acts. This culminated in the creation of the Four Nightingales with his brothers Gummo and Harpo, and a boy named Lou Levy. For a time they were strictly a singing act. When comedy business accidentally erupted on stage their mother initially discouraged it.

Gradually, comedy crept in anyway. They decided to go with it. They developed a sketch called “Fun in Hi Skool” that was essentially one of Shean’s sketches with reworkings. Groucho did Dutch dialect as the schoolteacher, and Harpo did a stock Irish stereotype. Elements of his subsequent persona—the curly red wig, and the impish pranks—were to evolve out of this character. Milton played a “Hebrew” at first, and later a “sissy”. He also danced. As we can see, this is essentially a “comedy four” act.

At the same time, Chico was developing along a parallel track as a barrelhouse piano player and dialect comedian. He did his “Italian” shtick with a number of partners until one day in 1912 he showed up at a Marx Brothers performance unannounced and started fooling around in character. The brothers started throwing fruit at each other and the rest is history. 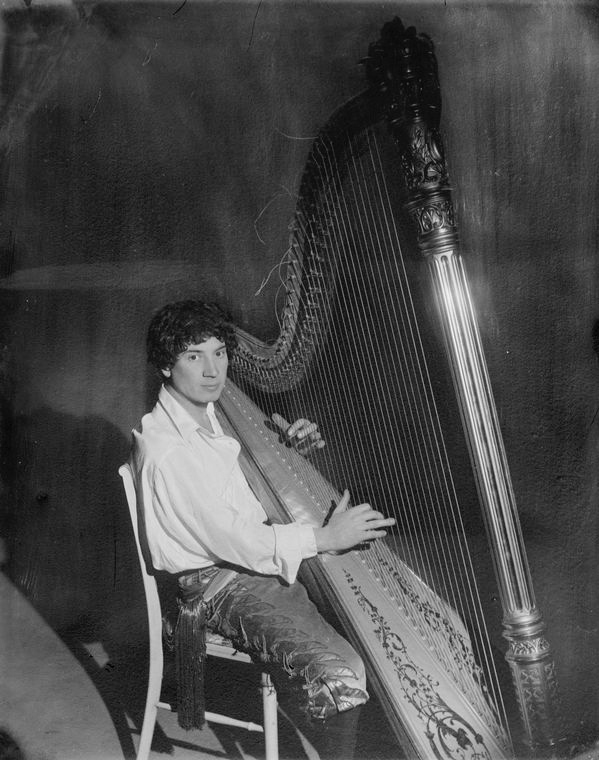 In addition to Chico’s trick piano playing, the act also now had interludes on Harpo’s harp, which he (may or may not have) inherited from his grandmother. These musical bits were to remain a staple of their act for the rest of their careers. Vaudeville reviewers all seemed to love these instrumental numbers, which gave variety, originality and a bit of class to their act. Musical interludes too were a staple of vaudeville. Many of the biggest acts in the business were strictly musicians. Among the top ones were Miss Patricola, the violinist; Dave Apollon the Mandolin King; Borrah Minevich and his Harmonica Rascals; and Jerry and Her Baby Grands. Jack Benny initially played the violin (for real); comedian Ken Murray worked the clarinet into his act.

From 1912 through the next decade was a process of refining their act. Several new sketches (many of them from the pen of Al Shean) came and went. And everyone but Chico changed his character.

First, Harpo stopped speaking. Uncomfortable with lines anyway, he was grateful for the day when Shean only gave him a couple of words to say, and they agreed to cut them. Harpo’s silent character is the hardest to find precedent for. He doesn’t mention any influences in his autobiography, so all we can do is speculate. I find the fact his maternal grandfather was a magician back in Germany to be instructive. Something about that battered hat and the way Harpo pulls endless props out of his overcoat seems to be evocative of magic, and there were and are certainly lots of silent performers in that field. We also know that the Marx Brothers saw Karno’s Speechless Comedians during their U.S. vaudeville tours and befriended the star of that act, a young man named Charlie Chaplin. Vaudeville also had the “Banana Man”, A. Robins, a mute clown who took endless things out of his coat, Joe Jackson, a mute bicycle clown, and “Poodles” Hanneford a mute equestrian clown. Vaudeville was full of non-speaking clowns.

WWI had two important repercussions for the Marx Brothers. In 1918, Gummo was drafted, and was replaced by Zeppo. And anti-German sentiment meant that Groucho had to drop his Dutch character, gradually replacing him with the wise-cracking, nonsense-spouting charlatan we all know today.

I began to probe the origins of “nonsense” in comedy — and almost fell down a rabbit hole.A crucial figure in that history is Lewis Carroll (the title of this talk is drawn from Alice in Wonderland). But Carroll himself had drawn heavily from nursery rhymes — it is a very old lineage. Likewise, fairy tales had been popular on stage for centuries, and enriched the English panto and the unique theatrical from known as the extravaganza. From these sources and humor magazines, minstrelsy, burlesque (of the Weber and Fields sort) and many other sources, the vaudeville stage was rife with nonsense comedians like the Marx Brothers. (Hence the title of this talk, emphasis on “ALL”) .

At this point in my lecture, I talked about some contemporaries of the Marx Brothers who had an overlap in sensibility. Just click on the link for a full article on each team or comedian… 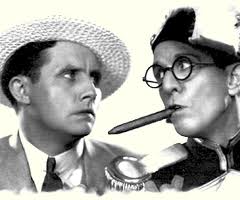 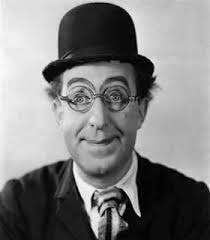 And then some legacies…

A successor to Groucho: 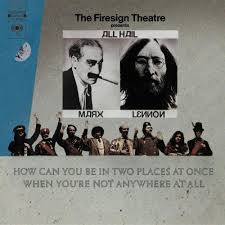 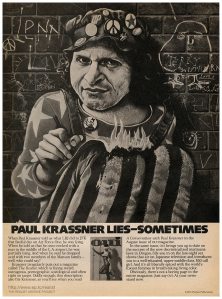 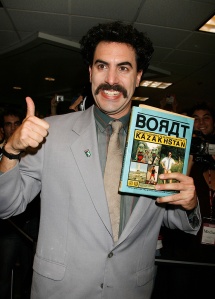 Sacha Baron Cohen, as estimable a piece of comic horseflesh as ever pulled down his trousers.

For more on the history of vaudeville, consult No Applause, Just Throw Money: The Book That Made Vaudeville Famous, available at Amazon, Barnes and Noble, and wherever nutty books are sold. For more on comedy film history please check out my new book: Chain of Fools: Silent Comedy and Its Legacies from Nickelodeons to Youtube, just released by Bear Manor Media, also available from amazon.com etc etc etc