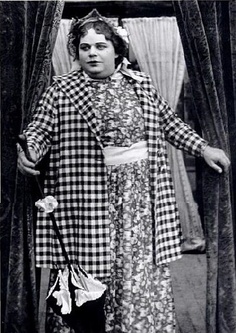 Today is the anniversary of the release date of the Keystone comedy Miss Fatty’s Seaside Lovers (1915).

This was among the first silent films I ever saw. It came on a videotape I got for Christmas in high school, which also included Love, Loot and Crash and one or two others. I think it was actually in the Beta Max format!

After much fooling around in the lobby, the family settles into a room. The suitors come up. Lots of fisticuffs with Fatty , which then evolves into dancing, and soon a total melee. The father kicks them all out. Then Miss Fatty puts on her ridiculous striped bathing suit, with cap and parasol. They all frolic on on beach. Fatty falls asleep on a rock. Wakes up, surrounded by water. The tide has come in . (Did this inspire a similar scene in Chitty Chitty Bang Bang?). The three guys try to rescue her and fail.  The “surf Kops” too try, fail and fall. Finally she just makes her way back by herself. Then she notices her parasol is broken, starts to cry.

For more on silent and slapstick comedy, including the comedies of Roscoe “Fatty” Arbuckle, don’t miss my book: Chain of Fools: Silent Comedy and Its Legacies from Nickelodeons to Youtube