“A Day at the Races”: The Old Grey Mare, She Ain’t What She Used to Be

For many of us, A Day at the Races (1937) represents the “beginning of the end” of the Marx Brothers. Which is funny, because if you’d said that to anyone at the time, they would have thought you were insane. The public loved this movie. It was a box-office smash (the team’s biggest, in fact). It was Groucho’s favorite of the team’s pictures. It definitely looks like their slickest and most lavishly financed Hollywood production. And many people continue to love this movie. So why the note of doom?

Because everything has changed. When is a Marx Brothers picture not a Marx Brothers picture? Well, one way to put it in perspective is to talk about things that were cut. Kalmar and Ruby wrote a terrific song for sanitarium head Groucho to sing called “Dr. Hackenbush”. Fans love it to this day, it’s up there with “Hello, I Must Be Going” and “Lydia, the Tattooed Lady”. The inclusion of this nutty song alone would have done much to beef up the movie’s street cred with the rank and file. Joe Adamson, for his terrific (seminal) Marx Brothers book Groucho, Harpo, Chico and Sometimes Zeppo, read all the early treatments and screenplay drafts and the original ideas for this film sound like just our cup of tea. In an early draft, when we first meet the bearded doctors of the sanitarium, they are all dancing together to a Viennese waltz. Cut. “Too satirical”. That’s the missing craziness, it’s just the sort of thing we got in Horse Feathers. Groucho as the head of a sanitarium with Margaret Dumont as his rich patient? Genius. What then?

It’s everything else. The mania in the MGM back office was for plot. That’s fine, in fact, it’s potentially wonderful, but that being the theoretical case, with the Marx Brothers the producers and writers never seemed to come up with anything better than a hackneyed, overused B movie plot. The plot of this? Some villains want to swindle Maureen O’Sullivan out of her inherited sanitarium; to save it, Harpo must win the big horse race! This scenario rightfully deserves our contempt, and any Marx Brothers worth their salt would have demonstrated such right in the very same film. Here, they bow to it. Maureen O’Sullivan and Allan Jones are the heroes; the Marx Brothers are their servants. Now…Groucho had made a noise about helping Lillian Roth find stolen paintings in Animal Crackers, but that was really just a pretext for several vaudeville routines. Here…are we really supposed to care if this woman gets to keep her sanitarium? Are we supposed to care who wins this fictitious horse race? Because we don’t. At least I don’t.  So the movie is a failure. It fails at both vaudeville and at plot. Perfect score. 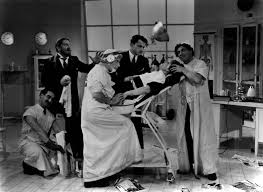 Some isolated crazy scenes remain to redeem perhaps 20 or 30% of the movie. Jokes appear at about one tenth the frequency as they had formerly. The pace is slowed way down, probably a result of the script having been taken on the road and performed in previews for live audiences. Timed for laughs? But they’re so few and far between!

Chico suffers the worst I think. The film starts with interminable scenes of him just being a schmo. His usual malaprop routines, ordinarily one of the highlights of any Marx Brothers picture, are gone. In its place, the allegedly hilarious “Tutsi Frutsi Ice Cream” scene, a violation of both Chico’s and Groucho’s traditional characters that goes on for about a thousand years and to me is about as funny as a rubber crutch. If GROUCHO were selling the code books, performed the routine about 40 times faster, and the victim were Edgar Kennedy, that would be funny. If Bud Abbott had done it to Lou Costello, it might at least be appropriate. But that’s not what happened, so people claim to like this version. It does nothing for me.

Groucho does get to shine in several scenes. I love the bit with the telephone call, where he pretends to be a Kentucky colonel vouching for his own character.  I love the rumba bit on the dance floor at the Winter Carnival, where Groucho works two women simultaneously. A couple of the operating room sequences are OK, and the love making scene with the wall paper (thank yaw!). But you have to wait eons for the tedious plot to go by until you get to these moments.

The musical numbers are undistinguished — and remember, they cut “Dr. Hackenbush” to accommodate them. The most memorable is the “All God’s Chillun’” number with “darkies” who appear out of nowhere and perform top-notch, breath-taking dance numbers. This at least is awesome entertainment, even if it doesn’t belong in the movie and completely upstages our titular stars. (The liberality of including them is somewhat undermined when the Marx Brothers don blackface to escape the horse barn they’re hiding in.)

In the final analysis, there is a good reason for loving A Day at the Races. Nearly everything that follows is worse by several orders of magnitude.