Buster Keaton in “My Wife’s Relations” 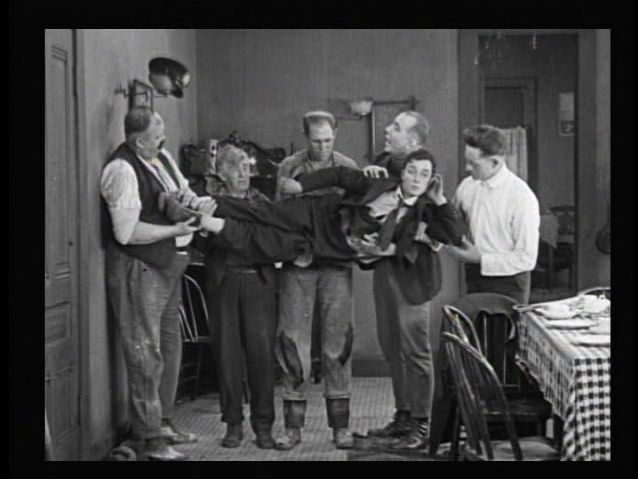 In May 1922, Buster Keaton released his comedy My Wife’s Relations, co-directed by Eddie Cline.

One of his series of “bad luck” shorts, Keaton is accidentally married to a strange woman by a judge who doesn’t speak English. Times being what they were, and Keaton’s character being the pliant fellow that he is, he just goes with it. He goes to live with the woman’s family: a mean father (Monte Collins) and four brothers, all of whom are about a foot taller than him (one of them is frequent Keaton heavy Joe Roberts). They examine him, pinch him, lift him up and weigh him, as though he were some livestock they had purchased. Several funny set pieces follow. A dinner scene where Keaton never gets to eat because he keeps having to  pass dishes to everybody. Finally, in desperation, he changes calendar to Friday so he can have some meat (they’re all Catholic). There’s a bit with him trying to make bed, which never does happen, so he gets no sleep.

Then the family finds a letter saying he’s inherited money. Now they have to pretend to be nice to him. They immediately move to a fancy house with servants. While they are preparing for a big party, they find out that the letter was meant for someone else; Buster is not actually rich. The family glares at him, ready to kill him. Meanwhile, he has accidentally emptied an entire box of yeast into a vat of brewing beer. The whole kitchen is full of foam. Keaton flees by rolling himself in a rug and tumbling down the stairs, jumps off a balcony, and gets on the train, hopefully bound for a place very far away

One of the interesting aspects of this film is that Keaton calls it MY Wife’s Relations, as opposed to HIS Wife’s Relations, the more common usage in silent comedy titles (e.g., His Trysting Place). Keaton had just gotten married a year before, and into a domineering, meddlesome family (although in his case it was sisters and a mother-in-law instead of brothers and a father-in-law) but still, autobiographical tension does seem to fly off the screen.