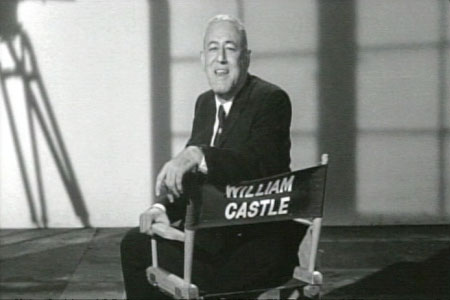 Today marks the centennial birthday of the colossal, the stupendous, the unspeakably great low-budget cinematic impresario William Castle (1914-1977). This is a man to be celebrated.

I believe in a  quality you might call “magical ballyhoo” — a tradition of marketing that is whimsical, poetical, prankish, and itself theatrical. In most senses, P.T. Barnum can be considered the inventor of this art form, although, like many great inventors, all he really did was synthesize many existing ideas and practices and present it in new packaging. While we love to go around saying that such hype is the coin of the realm today, few — very few — practice it in the true spirit I am talking about. Typically, it’s more a corporate, unimaginative shoving of something down our throats. True showmen have been surprisingly rare in Hollywood, for example. A few names spring to mind: Cecil B. De Mille,Mike Todd, Orson Welles. But, when it comes to ballyhoo, true ballyhoo, none can hold a candle to low-budget horror genius William Castle.

His beginnings are the stuff of legend. He started out as a teenager as an assistant stage manager on the stage version of Dracula starring Bela Lugosi. After several years in the theatre, he went to work for Harry Cohn at Columbia, directing his own movies by 1943. He was an associate producer on Orson Welles’ The Lady from Shanghai (1947). 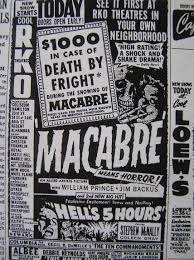 By 1958, he was on his own, directing and producing his own patented independent horror films, starting with Macabre in 1958. It’s impossible to imagine that Castle didn’t influence Hitchcock’s Pyscho…the small budget, the black and white, the gimmicks, the dark humor, the unprecedentedly awful subject matter. And Hitchcock in turn influenced Castle right back.

Castle’s films come with hilarious gimmicks, such as “Emergo”, his gambit for The House on Haunted Hill (1959), which consists of a skeleton that rolls toward the audience on a fishing wire, and “Percepto”, the “electric shock” in the seats that accompanies The Tingler (1959). 13 Ghosts (1960) provides special “ghost viewers” that allows you to see the titular phantoms (one of which, as I recall, is a headless lion tamer). The very best of these shockers feature one of my favorite actors, the great Vincent Price, at the very peak of his form, relishing every moment of Gothic melodrama like a poisoned bon-bon.

By the late 60s, tastes were changing. Castle tried to handle it at first by tacking in the direction of humor in films like Zotz! (1962) and The Spirit is Willing (1967). His best solution was to go for post-Bonnie and Clyde art and realism by hiring Roman Polanski to direct Rosemary’s Baby (1968). Though after this he was up to his old tricks. His last film Bug is straight-up drive-in B movie fare — not a bad way for him to go out. At least not an inappropriate one.

Here’s what we love about him!

For more on film history please check out my new book: Chain of Fools: Silent Comedy and Its Legacies from Nickelodeons to Youtube, just released by Bear Manor Media, also available from amazon.com etc etc etc

To find out about  the history of show business, consult No Applause, Just Throw Money: The Book That Made Vaudeville Famous, available at Amazon, Barnes and Noble, and wherever nutty books are sold.