Keaton and Arbuckle in “The Butcher Boy”

Today is the anniversary of the release date of the Roscoe “Fatty” Arbuckle short The Butcher Boy (1917).

This unremarkable little short is nowadays somewhat unduly enshrined in the public’s consciousness due to the fact that it contains the cinematic debut of Buster Keaton. Buster had recently quit the family act he’d always been in with his parents (he’d outgrown it anyway)  and he was about to start work in his first Broadway production The Passing Show of 1917. His chance invitation to appear in Arbuckle’s first film for his own production company Comique proved life-changing. 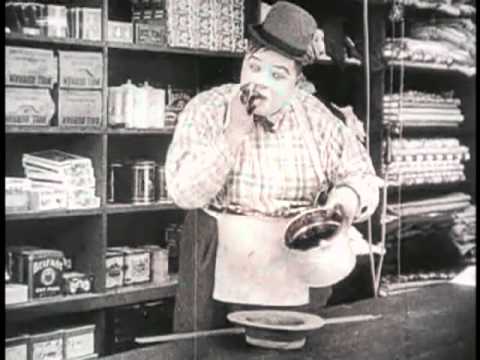 People have a tendency now to think of The Butcher Boy as a “Keaton and Arbuckle” movie (see, I even did it in my headline). But the two men are by no means co-stars in this film. The size of Keaton’s role is roughly equivalent to that of Chaplin in Mabel’s Strange Predicament, a film that similarly suffers today for being thought of as a “Chaplin movie”. 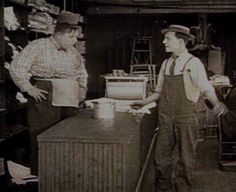 But Keaton’s role is small here. The movie belongs to its star, Arbuckle. He’s the butcher boy in a store . There’s no plot to speak of but lots of work related gags, crazy customers who enter etc. Arbuckle likes to flip his meat cleaver in the air so that it lands embedded in the woodblock.

Despite the vat’s worth of printers ink that has been expended on the subject, I’ve never considered Keaton’s turn in this film to be particularly auspicious. His work is competent, and remarkably assured and self-possessed for someone who’d never been on camera before, to be sure. But so much has been written about it. And I find myself distracted by the fact that none of it would never happen. It’s the famous “molasses in the hat” bit that bothers me. Molasses isn’t that sticky, certainly not sticky enough that it acts like superglue, rendering bonded objects immobile. So the bit comes under the head of a category I like to call “comedians trying to have a bad time.” Early silent comedians did this a lot, especially at Keystone, maybe 30% of the time. Struggling harder than the character logically would, falling down for no reason, then thrashing around, unable to get up, etc. Molasses is sticky, gross and inconvenient to have in your hat. It is not enchanted.

In my view, Al St. John is much more impressive in the film. The second act has Fatty going in drag so he can enroll in a girl’s school to get close to a female he’s interested in. At some point, St. John is harassing him, and Fatty flips him through the air, ass over teakettle. The work is totally St. John’s, and it’s an amazing little stunt. If you blink, you’ll miss it, but don’t miss it. The Butcher Boy is available to watch here on Youtube.

For more on silent and slapstick comedy, including classics like “The Butcher Boy” starring Fatty Arbuckle and Buster Keaton, please check out my new book: Chain of Fools: Silent Comedy and Its Legacies from Nickelodeons to Youtube