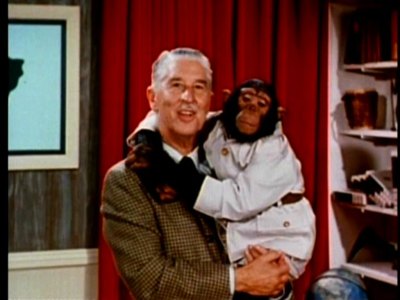 Now that there are entire television networks devoted to nature shows, it seems quaint and humorous that our access to such programming used to consist of about a half hour a week. Mutual of Omaha’s Wild Kingdom (1963-1985) wasn’t the only nature show on during its years of broadcast, but it was certainly the gold standard. If I remember correctly, where I lived it used to air on Sunday nights, the same night as The Wonderful World of Disney and it made for ideal family programming, interesting to both parents and children.

Television has always had the potential to be a great educational tool, but it also has a nasty ability to trivialize whatever it touches.  I’ve often written about how Orson Welles, one of the greatest film directors of the 20th century became a figure of fun because of his television appearances. Many people who actually made some great contributions to science and education, such as Jacques Cousteau and Carl Sagan, became the butts of comedy routines, and fodder for tv impressionists. These guys made actual, substantial contributions to humanity, and they were essentially transformed into “Guys with Funny Voices”.

Such too was the case with Marlin Perkins. He had been the director of the Lincoln Park Zoo in Chicago for 20 years, and the director of the St. Louis Zoo after that. But as far as the country was concerned he was a kind of punchline, a sort of awkward, stereotypical science nerd not unlike Wally Cox’s Mr. Peepers. And there used to be a joke that Perkins would invariably remain off to the side in some safe position while his cohort Jim McKay did all the hard, dangerous work of approaching and interacting with wild animals. The fact was, Marlin Perkins was a tough old bird, who once punched a reporter in the face for implying that he faked his segments on the show. He’d even been on expeditions with Sir Edmund Hillary to the Himilayas to search for the elusive Yeti!

In that vein, here’s an atypical episode of Wild Kingdom devoted to cryptozoology and myth. I am amazed looking back now and seeing the crudity of the show’s production. While plenty of dough was obviously spent on location shooting in remote locations, the studio sets in the wrap-arounds are hilarious in their simplicity. The window curtains look like something from your grandmother’s kitchen.

Mutual of Omaha’s Wild Kingdom was also one of the last one-sponsor shows. In the 40s and 50s, it was common for many (perhaps most) programs to have a single sponsor’s name right in the title of the show: Old Gold, Colgate, Fleischmann’s Yeast.  Perkins had a funny way (which also became fodder for comedians) of tying whatever was going on in the show into a plug for Mutual of Omaha’s insurance.