Another “Show of Shows”: As Close As You’ll Get to Vaudeville 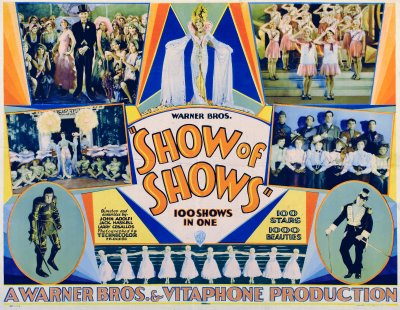 My good buddy Bob Greenberg first put me on to this one. It’s Warner Bros. (Vitaphone) response to MGM’s breath-taking Hollywood Revue of 1929. I won’t lie to you, the MGM one is much better. The Show of Shows is downright strange. But that doesn’t over-ride the chief selling point: the fact that this is a rare, irreplaceable record of a MOMENT that zipped right by. In 1929, sound had come to the movies and big time vaudeville was still alive. This overlap would only exist for a matter of months. So you get to see what are essentially vaudeville turns by all these stars I’ve written about here, and that you can see very few places else. Frank Fay is the Master of Ceremonies, and there’s also Ted Lewis, Nick Lucas, Winnie Lightner, Beatrice Lillie, Jack Buchanan, and Irene Bordoni. And because this is a Hollywood show, there are also a number of people who’d previously been associated with silent film, here to prove now that they can talk: Myrna Loy, Ben Turpin, Lupino Lane, Noah Beery (Sr), Loretta Young, Louize Fazenda, Lloyd Hamilton, Chester Conklin, John Barrymore, Dolores and Helene Costello, Bull Montana, and even Rin Tin Tin (well..he can’t talk, but he can bark). And this is less than half of them!

There are musical numbers of all sorts, singing, dancing, comedy sketches, monologues — and it’s (or was) in Technicolor! Not all the color portions have survived, but some have.  (Two strip, it’s 1929, but it’s still a rush).

To get back to the weirdness….Frank Fay is a phenomenon that I just don’t get. Is he too subtle? Has he not aged well? He seems neither to be telling any jokes nor making any funny faces. So what’s left? It’s like Washington’s hatchet that has neither the ax-head nor the handle. Where the hell is the humor? All I know is he’s wearing an awful lot of rouge for a straight man. Added to this are all sorts of strange, disorienting costumed set pieces. They may have made more sense at the time. Now they have a tendency to bewilder. Still, despite that, I recommend this movie highly, especially as a visual experience. I even own a copy — I wouldn’t steer ya wrong.

For more on show biz history including vaudeville, consult No Applause, Just Throw Money: The Book That Made Vaudeville Famous, available at Amazon, Barnes and Noble, and wherever nutty books are sold.