Douglas Fairbanks in “The Habit of Happiness” 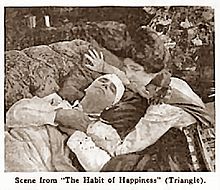 Today is the anniversary of the release date of the Douglas Fairbanks comedy The Habit of Happiness (1916). Directed and co-written by Allan Dwan, the film once again casts Doug as the misfit son in a family of wealthy social climbers. His character, Sunny Wiggins has a theory that health and wealth may be obtained merely by adopting a cheerful outlook, smiling and laughing, the titular “Habit of Happiness”. His family think he is just a bum. Mostly because he has literally been consorting with a pack of homeless men, whom he has been trying to teach his philosophy. (Funny anecdote: to play these men, the studio recruited a bunch of actual homeless guys. The only way Fairbanks could get them to laugh was to use a lot of foul, dirty language. Lip readers can catch it in the film). Eventually, Sunny gets his first client, an industrialist so melancholy that he has hired a special cellist just to play dirges for him. Fortunately, this man, whom Sunny cures, turns out to be the father of the girl he wants to marry AND a friend of his own father, to whom he relays glowing reports. A happy ending — how could it be otherwise?