Charlie Chaplin in “The Champion” 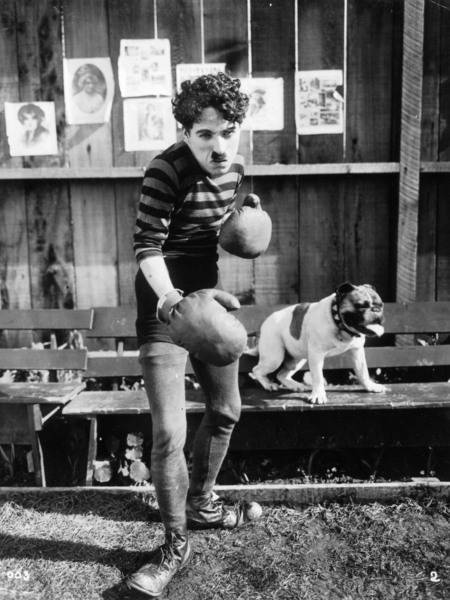 Today is the anniversary of the release date of the Chaplin Chaplin comedy The Champion (1915).

One of his early Essanay comedies, The Champion is a nice snapshot of Chaplin in transition, It looks back at the The Knockout, a Keystone film from the previous year in which he played a smaller role as the referee. And it looks ahead to A Dog’s Life (in which he would also have a pooch companion) and City Lights, in which he would work the comedy boxing business yet again. 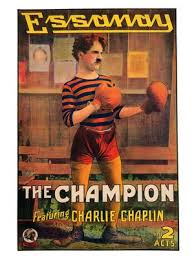 In The Champion, Charlie plays a down and out tramp who sees a sign advertising for sparring partners. He takes the job, being careful to load his glove with a horseshoe first, ensuring impressive success where every man in line ahead of him had gotten knocked out. By the play’s climax he is fighting the local Champion, played by Bud Jamison. The funny sequence that results is essentially the template for every comedy boxing match you’ve seen since. Arbuckle had done it before in The Knockout, but not with so many gags as Chaplin. Arbuckle’s character hadn’t been a coward and a weakling, and that’s the real gag engine. The recipe for comedy is the “David and Goliath” scenario. The business is all Chaplin’s, and would be re-used and adapted by every comedian who entered a boxing ring thereafter. The love interest is Edna Purviance, the trainer’s daughter, who goes around in male drag so she can get close to the action.

For more on comedy film history including Charlie Chaplin classics like “The Champion” see my book Chain of Fools: Silent Comedy and Its Legacies from Nickelodeons to Youtube