The Real Scoop on Mama Rose 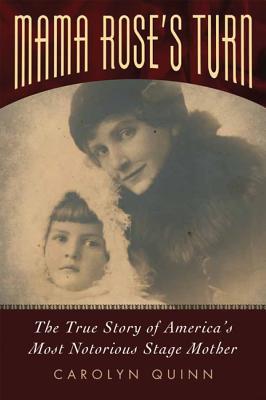 Last weekend I enjoyed a wonderful program at the Ziegfeld Society to promote Carolyn Quinn’s new book Mama Rose’s Turn, the first ever biography of Rose Hovick — that is, the first one not written by her highly prejudicial daughters Gypsy Rose Lee and June Havoc. The program was a charming hybrid, part lecture w/ slide show and part musical comedy, with Quinn as narrator, the Ziegfeld Society’s Mark York at the piano, and actresses in the roles of Rose, Gypsy and June.

* If anything, Rose was a much more horrible stage mother than depicted in the musical Gypsy. There, she was charming and lovable, if a bit too needy and grasping. In reality, she sounds downright sociopathic, every relationship in her life boiling down to what she could get out of people, right down to suing her own daughters.

* Surprising accounts of sex and violence! Mama Rose, it emerges, was a lesbian, and ran a New York boarding house and an upstate farm, both of which were gathering places for those of her persuasion, in a time when such resorts were rare and technically illegal. In 1937 one of her lovers was found shot and killed at the farm. Some have alleged that a jealous Rose pulled the trigger; Quinn contends that is was suicide.

* In the scheme of things, Gypsy wasn’t actually in burlesque for that long, if you think about it. It’s only about eight or nine years from when she became a strip-tease artist in the late twenties to when she got her movie contract in 1937. After that, she merely dined out on her LEGEND as a striptease artist, wrote about it, and occasionally re-created it, as in the film Stage Door Canteen (1943).

* Dainty June appeared in two Harold Lloyd movies! You heard right! In 1918, all of six years old (if we can trust her birthday), June appeared with Harold in On The Jump and Hey There. These were bit parts, but it’s kind of thrilling, and it just kind of shows you that it’s all in the timing. A few years later and she might have gotten cast in Our Gang, which Hal Roach also produced.

* If reports are accurate, June could dance (including en pointe) at age two and a half.

* There are dozens more like this, but for that, you’ll have the buy the enjoyable book.